I'm still trying to figure out the "sweet spot" for my settings. I'm getting rather frustrated. Every single night, I either pull the mask off right around 3 hours into wearing it or I do something like I did this morning. Woke up for a bathroom break, took the mask off/turned the APAP off temporarily and I was so exhausted that I didn't even make it up for the bathroom break and went back to sleep until time to get up for work.

Initial AHI was 5.2. Depending on how good the night goes, over the 3 hours I'll average somewhere around 1-2 AHI. However, Centrals continue at 1+. I feel like I can confirm those central events because it does feel like my body just doesn't want to breathe and just stops here and there even when sleeping with the mask sometimes. Not very often, but it happens. I sort of noticed that before I did the APAP, however. So I'm not sure if that's the pressure aggravating that or if the OSA is now suppressed and the CA is left and showing up now.

I have the For Her Autoset version. I started out a few nights trying the For Her mode, but it was ramping up to 9+ on the pressure and had so many events that it just stayed ramped for sometimes 30+ minutes per event. So I switched over to regular APAP mode before bed last night.

I started out with 5-ish starting pressure, minimum ramp of 6 and max of 10. It was ramping up to nearly 10. Eventually I tried 6 starting pressure and minimum of 7 with a max of 10 in an effort to stop the big ramps and already have the pressure at a reasonable amount to bring the event numbers down. But the Centrals remain. Only one or two seem to show up, however.

No matter what, ramps still go up to 8-9 and stay there for a long time on each ramp. Switching from For Her Mode to regular doesn't seem to have improved that. Between those long ramps and I keep pulling the bleeping mask off around the 3 hour mark, I'm not getting much done. Granted, the other day when I had 3 hours with the mask on and I slept about 6.5 hours, I still felt way more energetic than normal. Then I had bad nights again.

I keep seeing that I'm having "large mask leaks" noted and I don't know of a time when I've yanked the mask off that I didn't stop the machine. I'm using the medium nasal pillows on the P10 mask. I thought that because they go slightly into the nostrils that the large might be better, but the large ones don't seal well and I switched them back to medium as soon as I put them up to my nose and saw that they wouldn't work.

The mask and pillows seal well until it gets into the upper 8's and 9's in pressure, then it is probably starting to get bigger leaks. What can I do to make it kick back down once the event is over? I'm probably yanking the mask off because it is staying on too high of a pressure for too long and now my CA's are kicking up. This was either due to higher pressure or maybe I have a little central apnea showing its head after the OSA was kept in check, as well.

Anybody got anymore advice? I know that 3 hours isn't a lot to work with. Every single night, I pull it off at 3 hours. 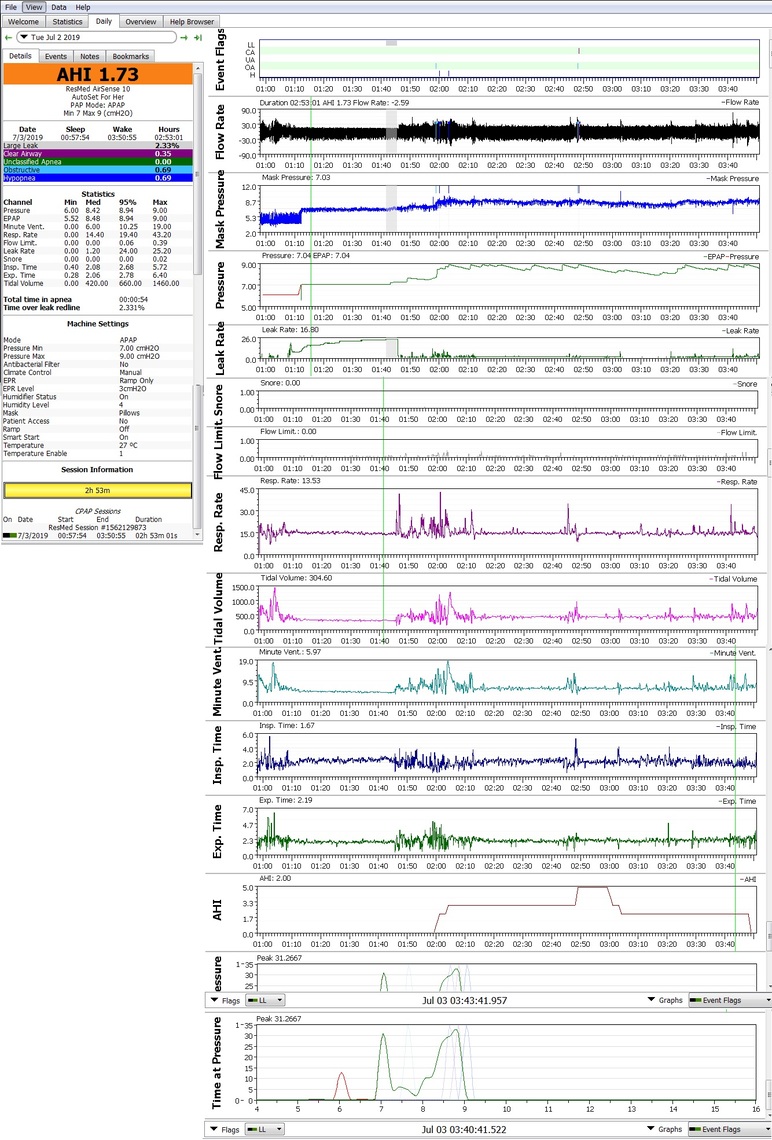 I think I'm going to order that Swift FX headgear to hold it on better, as well.

One thing to keep in mind about apnea treatment is that each night is always a bit different. It is a mistake to come to conclusions about a setting after only a few nights. I have found that it takes up to a month at the same settings to really see what is happening. Yes, early when you are first starting and making bigger changes less time is needed, but when you get to the refinement stage it just takes longer to see the real trend. the Statistics tab is useful for keeping track of the averages.

I am amazed that you got so many graphs in one image. Cut and paste? I actually don't find most of the graphs to be all that useful. I left click and drag on the graph title to bring the ones of interest to the top. My standard layout is in this order from top to bottom of the screen.

The rest of the graphs I don't worry about much, and just scroll down occasionally to look at them, and wonder what they are good for...

On the For Her vs standard APAP, the For Her mode should respond quicker to hypopnea and possibly flow limitation, and if events occur in quick succession it can lock in at that as a new minimum pressure. That is good for preventing events, but it does not let the pressure come back down during the night. And, if your max pressure is set above 12 cm, it stops responding with more pressure to OA events when it gets to 12 cm. So it is not good for somebody with obsructive apnea needing higher pressures. That is not your case. In standard mode it will probably respond with more pressure slowly and ramp back down slowly if there are no more events. That can be good and bad. You can get into a cycle overnight where the machine is continually ramping up and down. Most prefer a more constant pressure even if it is at a higher pressure. I use a fixed pressure of 11 cm and find it just fine.

As far as your pressure settings a maximum of 9 looks about right. If it were me, I would move the minimum pressure up to 8 cm. While that might sound counter intuitive a higher minimum can avoid events, and avoid having the machine jack the pressure up. Overall you might end up with a lower Median pressure for the night. And once you see what that does, you may be able to slowly reduce maximum pressure down to say 8.8, and then 8.6 cm for example to see what that does to help avoid centrals.

Converting the P10 headgear to the Swift FX is probably a good idea if you can't keep the mask on. It is much more secure and adjustable. Just keep in mind that the conversion is a one way trip as you have to cut the plastic prongs on the P10. This how I did it. The headgear only for the Swift FX is not that costly. And, I think I told you before, the other trick is to use a satin pillow protector to make the pillow more slippery, and less likely to drag the mask off your face.

I also think much of your problem is still in getting used to wearing this contraption while sleeping. It takes a while. 9 cm of pressure is not very high, and should be quite comfortable. I suspect that amount of pressure alone is not the root cause of waking up.

Hope that helps some.

So last night I tried these settings:

The settings look good, as does the results for the short period of time you had it on. Does SleepyHead indicate anything abnormal leading up to when you took the mask off?

Nothing different from what I've normally seen. How many events per hour of obstruction and central are acceptable? Is it typically the 1-2 AHI for each?

The professional treatment standard is an AHI of less than 5. With centrals I struggle to keep mine under 3, while my wife who seldom has centrals easily gets under 1.

I would try EPR=2 Full Time. No other changes at first. To achieve the same therapeutic value you may need to increase your pressure because at a "pressure" of 7 your EPAP will be 5, it is EPAP that treats Obstructive Apnea.