Hi. I started APAP about 8 years ago, generally getting decent AHI numbers 2-5 range with Swift fx. I had to stop for 3 years because of a voice injury, but have started again due to apnea getting worse. Now, I have been using the Airfit P10 for about 4 months, and have widely varying results. I started with the same pillow size (small) as my Swift fx, but decided that was too small because it was leaking and the prong kept sliding into one nostril. When I switched to the medium, if fits beautifully, no leaks, completely silent and comfortable, but my numbers are 8 or higher. Will this improve with time? I made the switch to the medium 3 nights ago, and each time in the past when I have tried to switch I have only stayed on the medium for 2-3 days at a time due to the high numbers (and feeling so terrible). With the small, I am getting loud leaking and numbers varying from 3 to 8+. If someone knows whether I am just going through a typical transition, please advise, because I feel very comfortable with the Medium pillow, but miserable endless headache otherwise. Thanks in advance for any pointers.

There is no "typical" with OSA. The mask likely isn't the problem. Yes, you want a comfy mask that you can live with and doesn't leak to the point it is irritating and affecting your ability to sleep but the mask likely isn't the problem. I strongly suspect you should undergo another sleep study and more important a titration study as even "decent" AHI numbers that vary up to 5 are not all that good so I suspect your prescription may have changed as well as the causes for the sleep apnea. I am not familiar with your masks and perhaps others can comment but when a mask leaks slightly into your eyes and makes rude noises, I have found mask pads to be a big help. You can buy them commercially or make them out of tee shirt material cut in the shape of the cushion with your mouth part cut out (of course).

Yes, I did have another study before I returned to APAP, and I use a nasal pillow. I'm not a mouth breather.

Welcome to the forum. Some questions:

Do you have a copy of your most recent sleep study? If so, what was the breakdown of apnea events. What was the proportion of central apnea events to obstructive apnea events? When you get numbers in the 8+ range same question. What portion of it is central and what portion is obstructive and hypopnea? Do you know what your minimum and maximum pressures are? And what is the highest pressure it gets up to during the night?

The best way to figure out what is going on would be to download SleepyHead and look at your detailed results with that software. SleepyHead supports most of the common machines. The software is free. What make and model do you have?

Sorry for all the questions, but it is hard to make suggestions without knowing some of the background and detail. I don't think the problem is your mask insert size. If it feels comfortable and doesn't leak, it should have no effect on the AHI.

The image below is an example of what you can see with SleepyHead. 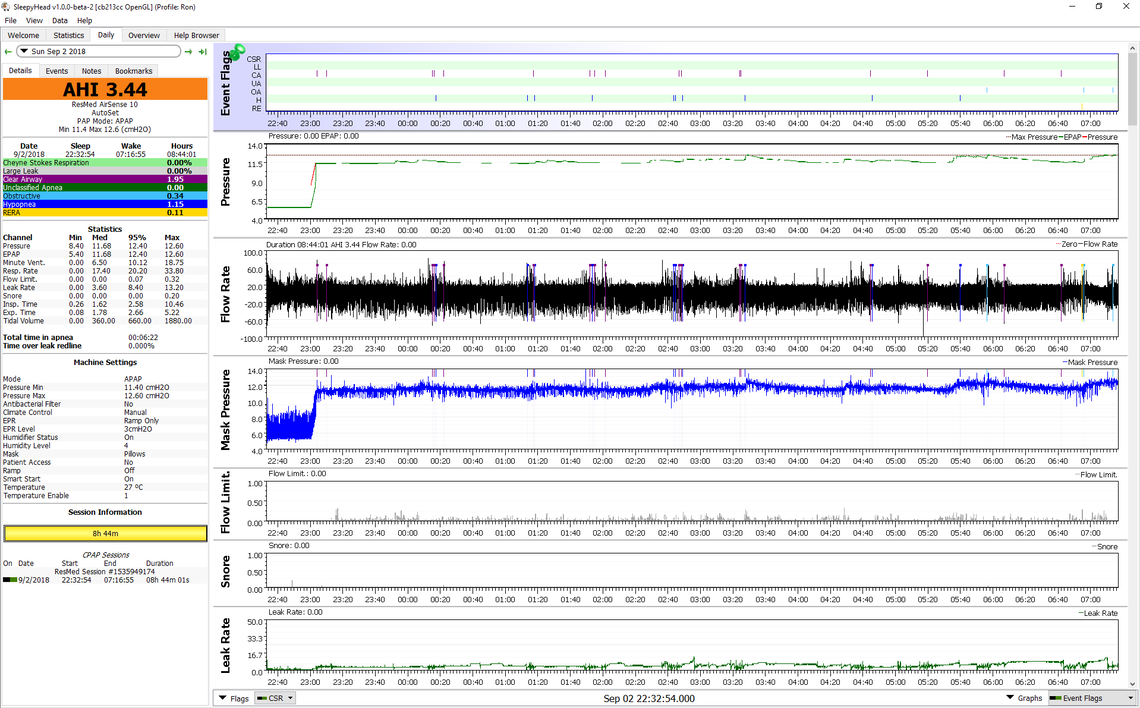 I don't have SleepyHead yet, but I have a DreamStation with the DreamMapper App. The App doesn't appear to show the leaks maybe because my Pillows are ResMed, not Respironics. So, for last night, my AHI was 8.2, 90% Pressure 9.2cmH2O, Min-Max Pressure 8.0-10.0. It shows Total Clear Airway Apneas 56, Total Obstructive Apneas 2, and Total Hypopneas 20.
One thing just occured to me. I do suffer from migraines, and have had a migraine for the last 3 nights. I look at the headache as caused by lack of sleep, but on the other hand, maybe I am getting poor sleep when I am developing migraines. Are you aware of an association? I just received a prescription today and my migraine is almost gone. Maybe I should be looking for a correlation between migraine and sleep numbers, especially since my obstructive apneas are always pretty low.

And thank you for your response and inquiry. Just due to time constraints, I may not get to downloading the SleepyHead for a while, but maybe the numbers I just gave you, and some more I will dig up, can lead to some clarification.

That information is quite helpful. Based on that one night it would appear your main problem is central apnea (clear airway). CPAP pressure does not prevent central apnea so you can't prevent them by simply increasing pressure. The airway is already open. In my experience central apnea is very erratic. Some nights you have it, and other nights you do not. When you get to download SleepyHead and zoom in on the Hypopnea events you may find that they are very similar to the central apnea events, and just do not progress to the point of apnea, so do not get flagged as CAs.

If you have not already I would suggest you read the posts in another recent thread here about central apnea occurring just before waking up. It covers a couple of different types of central apnea, one which is periodic and the other which may be just sleep-wake-junk (SWJ). The former is more serious in my opinion, and Respironics may flag it as periodic breathing. The SWJ has to be manually picked out by zooming in with SleepyHead and looking at each event or series of events to see what it is.

Are you using FLEX and if so at what setting? You may want to experiment with different settings. I think that the DreamStation may have an adjustable rise time associated with the FLEX that you could try changing as well.