Better off without the CPAP?

I received my CPAP In December of 2017. I’ve been using it everyday and, having the ResMed AirSense 10 model, there’s an app that shows me my score to which I have scored 100 every single day. So I do just fine with the machine. But I feel more tired during the day than I did before using the machine. My sleep apnea is extremely mild. So mild that it’s almost nonexistent according to my doctor. But I was still given the machine. I also have narcolepsy. Before the CPAP I felt great just being on my medications. Now with the CPAP I’m not. Is it possible for the CPAP to interfere with my medications? I feel like the CPAP is doing more harm than good at this point. Thoughts? Thank you!

I am a dentist working in dental sleep medicine. Since you have mild sleep apnea, I am surprised that you were not offered oral appliances as an alternative choice, if you have your own natural teeth in reasonably good shape. They tend to work quite well for your level of OSA. Let's face it, for many people, especially people with a very sensitive nervous system, CPAP is a pretty intense experience to have while you are trying to sleep. The anecdotal experience from my office is that it is so intense that it disturbs the sleep of some mild OSA patients more than it helps them. An oral appliance is a much gentler experience. No noise, no compressed air to breathe against, no masks, no straps, no hoses. It can definitely make a more peaceful night's sleep for mild patients, in some cases. Arthur B. Luisi, Jr., D.M.D.

That’s really interesting! I have not heard about that. I really don’t have a problem with the whole experience. I just don’t see it helping my daytime sleepiness when my medication was doing just fine combating it.

Well, sometimes you just have to sit back and try to think it through. You are now more tired than before. What is the only factor that changed--- the presence of CPAP. Certainly logic would point to that as a possible cause. Remember, when you are asleep, sometimes things that happen on a subconscious level have an effect that you are not aware of. An example of this is restless leg syndrome. A person's legs move, sometimes fairly violently, when they are asleep. On a conscious level they don't notice anything except that they wake up tired. You should discuss the situation with your health care professionals. Sometimes you can't be sure unless you test things out. If you use an oral appliance and wake up more rested than with or without the CPAP, it is the right solution. If you don't feel any better than before treatment, maybe the medications were good enough. You and your doctors can figure it out together. Arthur B. Luisi, Jr., D.M.D.

I was diagnosed with severe sleep apnea. I have been on the Resmed Airsence 10 machine for 3 months. My scores keep coming down but my symptoms have not changed. I still don’t have a lot of energy. I am still a poor sleeper. I wake up in the middle of the nite and wait for 2hours to get back to sleep. I still pee twice a night. No other improvements. Last nite I had .2 events and ahi of 1.6and a central score of .6 I do have some events of AF and experience out of breath if I run or climb. But I can walk just fine. I was hoping that the machine would have changed my life but it has not. I never did snore nor wake up gasping for breath. I am wondering if I just had one bad night during the lab test. Is it any surprise given that you are wired up and anxious. I will get an overnight O2 test without the machine to see if that is a problem.

You are getting very good results (congrats), but haven't been using your machine very long. It really can take awhile before you feel better and see the benefit, depends on how long you have not had good sleep. There also may be something else going on that is contributing to your poor sleep. I have learned that poor sleep can be due to a multitude of factors. As an example I include this copy of one of my emails to provide you some insight into my situation and the discovery that has helped me greatly. Keep us up to date with your progress. Good sleep is so very important. 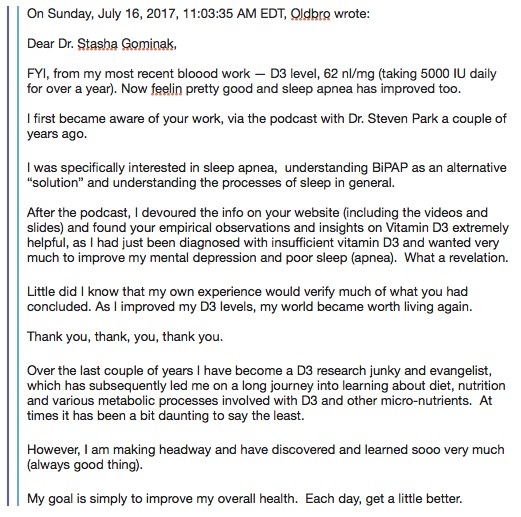 A cpap machine will only work for you if it is properly adjusted for you. Most patients only see a sleep doctor every year at best, this is not good for having a machine tweeked for best results. The Airsense10Autoset is one of the best machines around, but even its performance will be down if it is not tweeked. What I mean by this is that some sleep doctors will give a setting of 4 to 15. This is not very acceptable, if a pressure of 8 will clear most of you apneas, this is close to the low pressure your machine should be set to, leaving the machine to rise in pressure to deal with the others. A machine set to 4 to 15 is just a doctor being lazy and not doing his work properly. If you were to download data you would see what pressure the machine get up to and when and how often you are having apneas. This is what your sleep doctor should be doing and setting the machine to cope with most of you events, the machine will handle most of the events outside this pressure setting. This way the machine does not have to rise so far in pressure to cope with every event and disturb the patient also.

LONG STORY, PLEASE READ IT. About ten years ago I was always fatigued so my Primary (PCP) sent me to see a Sleep Doctor. My sleep study showed that I had severe Obstructive Sleep Apnea (50 events per hour). My Oxygen levels were low and at one point my saturation was in the seventies. This was enough to give me hope that CPAP would give me my life back. It hasn't. My Sleep Doctor also showed me the chart that indicated that I had almost no REM Sleep. My followup study a few years ago showed that I am still having almost no REM sleep, but my Saturation levels have been good so at least maybe I am not damaging any brain cells. We have no idea as to why or what can be done to fix my REM Sleep. For many years I have also been taking Provigil to get me thru the day/night (I work second shift). After about five years and some time spent in the hospital following surgery where they didn't seem to care one way or the other if I used my CPAP or not, I began to think that CPAP was a scam. So I quit for over a year. The result of this choice was a Major Depressive Episode (MDD) that came out of nowhere for no reason. I was hospitalized for three weeks and underwent a series of 25 ECT's. They got me back on my feet and after a very tough seven months I returned to work. Note: I would also recommend that ECT be avoided unless all of the doctors involved believe that nothing else is going to save your life.

My life was still not where I felt it should be so after a few years of therapy that did not get my head on straight I finally decided to find a new therapist and ended up at the VA Clinic near where I worked. The APRN that reviewd my psych medicines got me off of some, reduced the doses of others, and put me on something that I never heard of before. After being on this new medicine for over a year now, I am happy to say that without a doubt it has saved my life and it has given me most of my life back. For years all of my former hobbies were on the back burner and I had lost interest in life. Now, thanks to Lamotrigine I have returned to photography, woodworking, and Ham Radio. I would like to return to hiking in the White Mountains but an achilles tendon injury and advancing age (72) will force me to do my walking on fairly level ground.

I really am hoping that my REM Sleep is on the mend as well. *They say that it is necessary to have REM sleep in order to wake up refreshed. * I have noticed that I am beginning to remember having dreams now. That is something that I have not done in many, many years.

Sounds like your situation is very much akin to my own. Keep me updated if you find anything new, please. What dose for the Lamotrigine? I'm only now getting to 150mg.