do you recognize this pattern?

I would like to ask your opinion on the result of a recent PSG study done in order to investigate a possible cause for my poor sleep quality.

I'm 42, BMI 23.1, normal BP, no snoring, no alcohol consumption. I do experience occasional day sleepiness and don't feel rested / refreshed upon waking up. I only sleep for 5-6 hours/night and have a severe circadian rhythm offset (ASPD).

The PSG revealed a moderate AHI of 19.6, with 48 OA and 2 CA events. This would not be unusual in any way, except for the fact that the average OA event duration was very long (at 42.2 seconds) and SpO2 desaturation was lower than expected for such long events (only 1 minute in total below 90%). The signals also revealed a rather unusual pattern, repeated for almost the entire duration of the N2 stage (image 1), with periodic (very) gradual drops in flow pressure, but discernible thoracic effort (images 2&3).

My GP was unable to explain the phenomenon, or how a supposedly obstructive event can be triggered in such a gradual fashion, and with such frequency. My personal opinion is that I was not actually experiencing classic OSA, but something else, that I cannot fully understand or explain. Did any of you ever had similar events?

Hint: may be related to a second type of recorded apneic events (image 4), that occured exclusively during REM and which I believe to be catathrenia (since there is no drop in SpO2 and it sometimes happens while awake (and I'm often times aware of it). 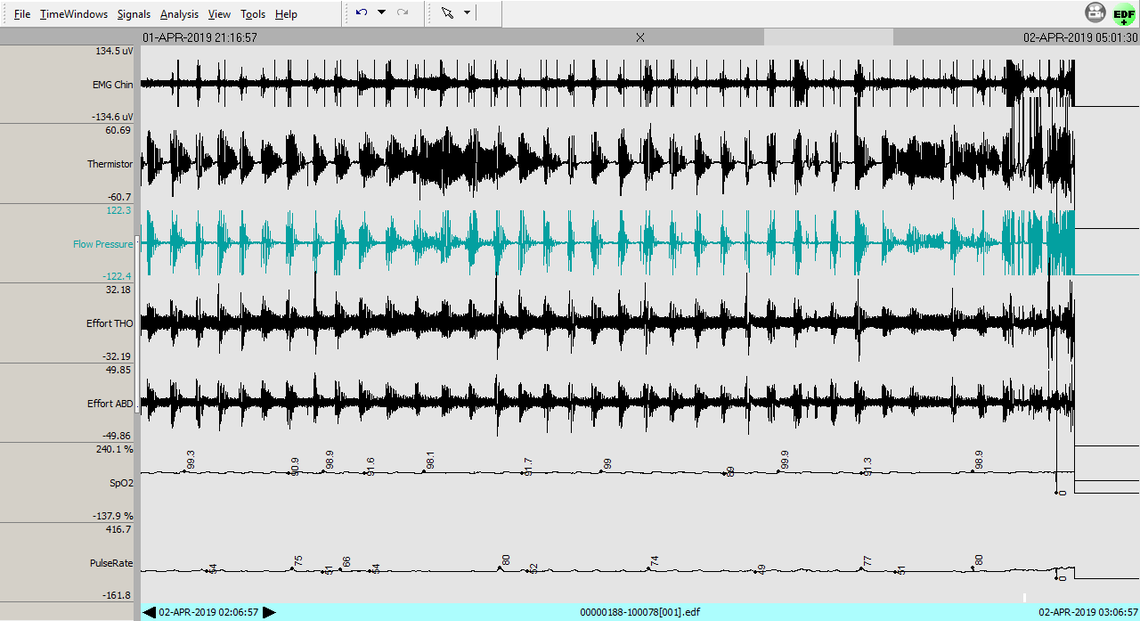 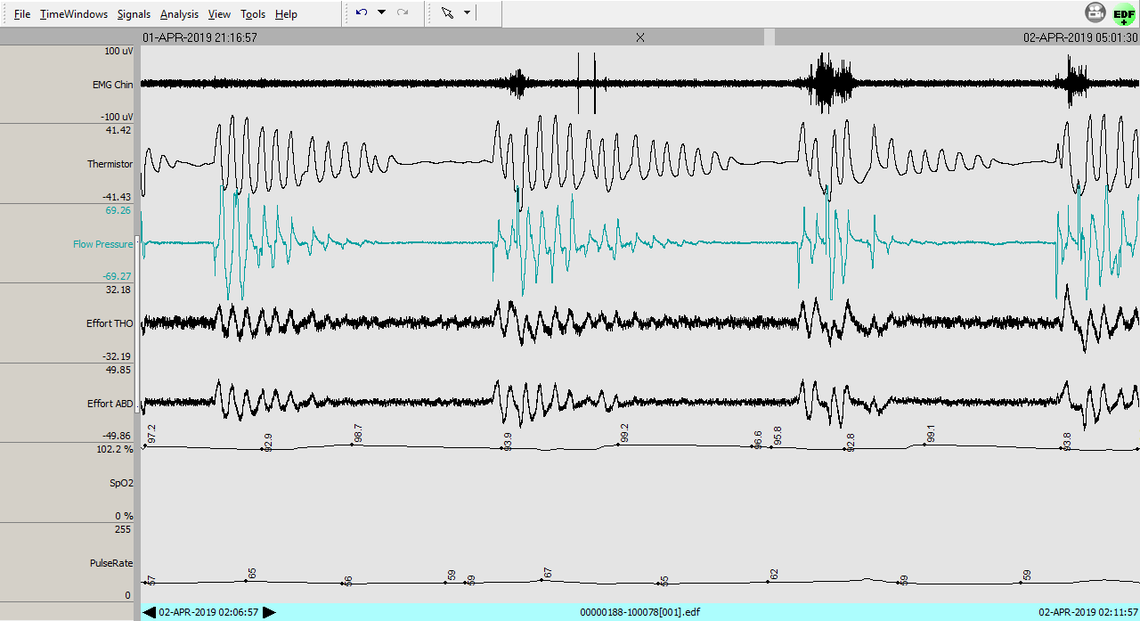 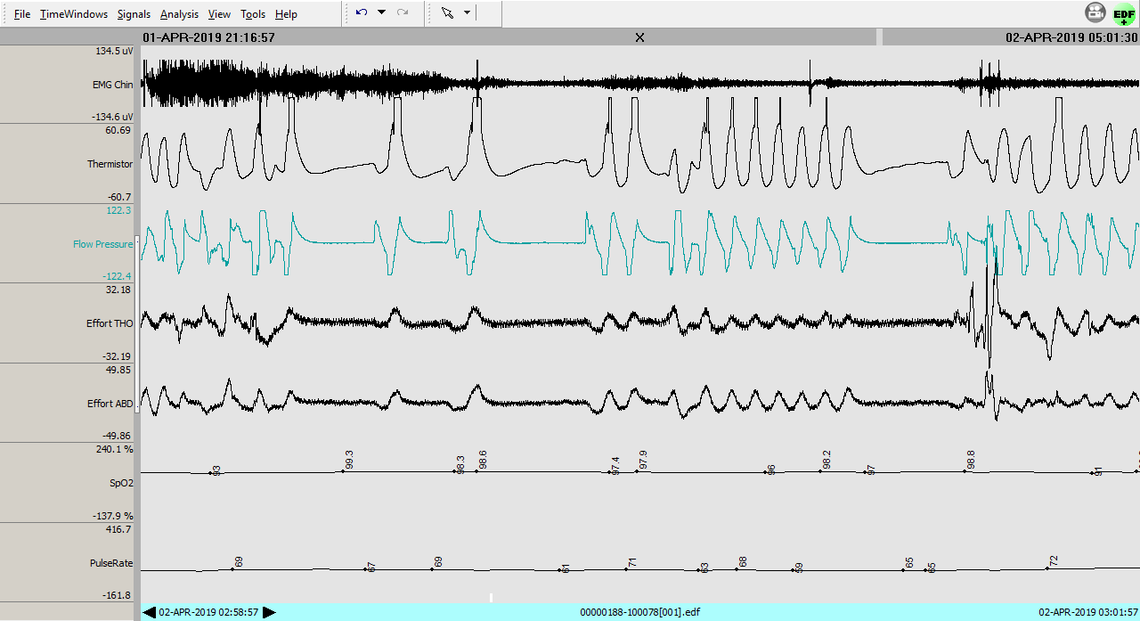 I am not a medical professional, but those events look like obstructive sleep apnea events that are repeating frequently. Some attribute frequent OA events to a sleeping position where the head and neck are restricting flow. However, if this was a lab test they should be watching you and identify that as a factor.

The following clips are from the ResMed AirSense CPAP Clinical Manual.

Obstructive sleep apnea is typically resolved with pressure from a CPAP machine. Central sleep apnea is not ususally controlled by pressure, and may even be aggravated by it. So my thoughts are that you are likely a good candidate for a CPAP. Can't explain why other factors do not line up with the typical OSA sufferer. Probably you should discuss with your sleep doctor.

On this topic I can respond confidently as the expert! What you have posted there in images 2 and 3 is very typical obstructive sleep apnoea as recorded by a PSG. It's not all the data that a full PSG would give, for example there's no EEG, so technically I can't be sure if you are awake or asleep, but that pattern is very typical of OSA. The degree of oxygen desaturation is not that unusual. I imagine your GP couldn't explain it because he doesn't know how to read a PSG, or see a lot of them. Nor should he because it's not part of his job. Image 1 looks to be the same thing but on a really large time scale. Image 4 appears to be mostly awake (although again, without EEG it's hard to be sure), possibly trying to back to sleep post arousal, so I wouldn't worry too much about that.

Hello Sierra & sleeptech and thank you for your input!

I didn't include the EEG because I was trying to keep the signals clear and readable. The OSA events were recorded exclusively during the N2 stage, while the last one was in REM. They probably have nothing to do with each other.

However, my thought was that maybe there is another explanation for the obstructive events (as in not the soft palate blocking the airway), given that I do not fit the OSA profile. Could a deviated septum account for such events? I wake up practically every day breathing through only one nostril... If that's the case then I may try to correct it surgically and get rid of it permanently.

No, a deviated septum does not cause OSA as far as I am aware. However, being young, fit and slim doesn't discount you from having OSA. It is certainly more common in people who are older and overweight, but it can occur at any age (right down to neonates) and to people of any weight. It looks like you just got lucky.