Write a reply
Oxygen level tracking through the night.

My o2 levels were dropping to 63%, very bad. I got put on a CPAP machine which helped but still exhausted. Last test said I dropped to 85%, below the 88% threshold. So now I have an oxygen concentrator on the CPAP. Testing it with a finger reader I realized how quickly your o2 levels can change. So it seems to me by the time I wake up and can check it it could have recovered so I want to track it through the entire night. If the Dr tests it it costs me $125 out of pocket just for the oxygen test through the night, and the device was miserably painful to have on my finger.

Option 1 is to by a device to track it and chart the level through the night. I think anything on my finger might cause more sleep problems the way I sleep, and I would hate to pay upwards of $200 to find my levels are fine now and not really need it anymore other then the occasional check.

Option 2 is a watch. Looks like Garmin and Fitbit are the two big ones with o2 tracking. But Garmin will only track for 4 hours per night, that seems pretty stupid, I would rather spread the number of checks its capable of over 8 hours then have 4 hours not tracked. Fitbit it seems does not show the o2 level but a variation graph to know any large variations through the night. I guess knowing my 02 level is at 99% as soon as I start the cpap machine I could estimate the rest. A watch does a lot more sleep tracking and also fitness tracking through the day and I would probably sleep better with a watch on, fitbit looks pretty small. So once I know my 02 levels are OK I would have other sues for it as well that could improve my health.

Since fitbit recenty got FDA approved for oxygen tracking and started rolling out the oxygen variation chart in Jan 2020, anyone have information that they might take it further and provide numbers. Seems like fitbit is really pushing hard for their watch to be used in sleep apnea arena.

Any feedback or advice, I am going nuts trying to decide how I can tack my 02 level while also not wasting money. Leaning towards the fitbit as my best option.

I talked to Garmin, the "Garmin Vívoactive 4" will track o2 levels all night, you can even turn it on for 24 hour tracking. Looks like battery life with o2 tracking while sleeping would still be a few days, and it does chart oxygen levels by percent not just a variation like fitbit. Fitbit would not say if they ever would show the number, but clearly they have a number in order to know how much it varied. Looks like I will order the Garmin Vívoactive 4, while more expensive then a unit that just check o2 levels and heart rate, it has GPS for my hikes and walking and a lot more useful features I can use for years and not purely to check o2 while sleeping. Will test its accuracy compared to my finger oximeter and see how it tracks my sleep and report back.

You may want to look into using OSCAR which is a free open source software used mainly to display data from a CPAP. However, it is also capable of displaying data from an Oximiter if the model is compatible. OSCAR can be downloaded here. You need a PC or Mac and a SD card reader to use it for the CPAP data. OSCAR used to be called SleepyHead and here is a screen shot from SleepyHead that shows what meters it supports. I believe OSCAR supports the same ones. While I don't use an oximiter, it does seem like it would be a good idea if you have one to display the CPAP data along with the Oxy data. If you download OSCAR it may have a more updated list of Oxy meters it supports. 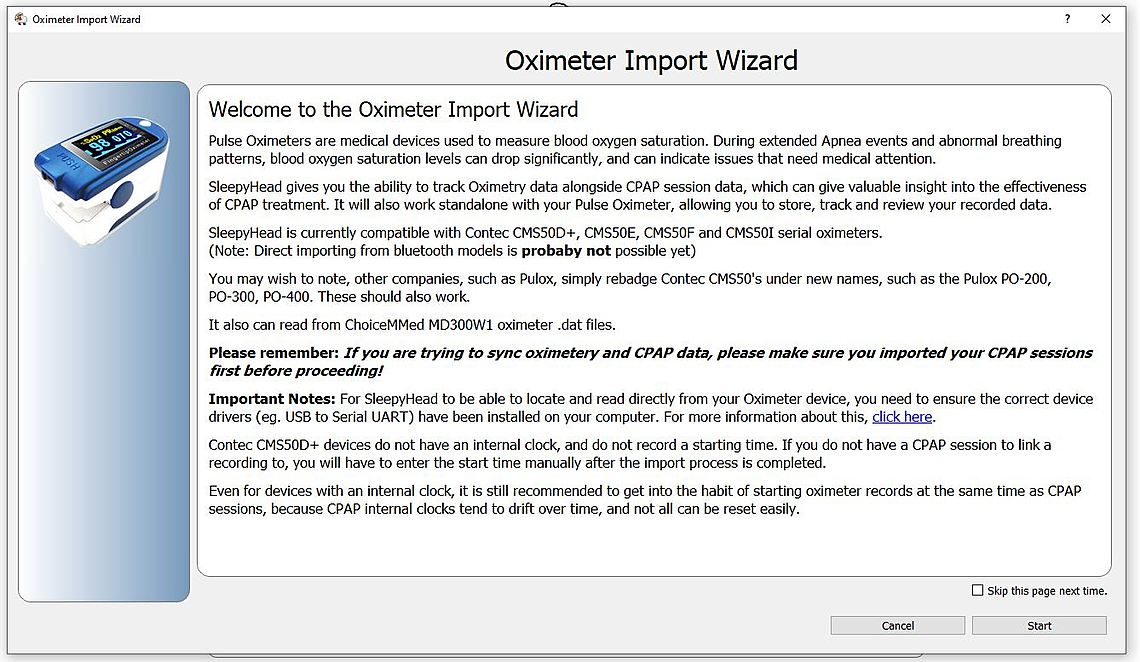 I've been using Sleephead for years and now its Oscar, same thing but probably updated. I also use my Oximeter from time to time. Yes Oscar does allow to download from certain Oximeters. HOWEVER, if your a mac user and running a later OS than High Sierra you may have problems getting a driver so it can recognise the Oximeter. Its a bit complicated for Mac users as you still need a driver for the earlier OS as well. The makers of most Oximeters, Contec, do not supply reading software for Macs. I read it in my Oscar software but as I said for mac users its not straightforward. I can sync the timing of the Oximeter to the CPAP time so I can do direct comparisons to what the CPAP machine has recorded at the same time. By the way my second iMac runs Snow Leopard, for that OS you'll need the old Sleepyhead software as Oscar doesn't run on Snow Leopard.

I have a Contec cms50F, it can record o2 levels over a 24hr period. it is like a large watch with a finger monitor that plugs into it. Its USB rechargeable. Cost me £79.95 in the UK through Amazon.

I have a wrist Contec CMC50F too, my how times have changed. Mine cost A$42 a few years ago, still works well. Unfortunately now with the way the medical prices have skyrocketed due to demand because of Covid 19 the prices are now up around A(Australia)$250

Well after over a week of using the "Garmin Vívoactive 4" very impressed. I have it track my oxygen 24 hours a day. Seems fairly accurate and a lot more comfortable then something on my finger. It also monitors my sleep patterns, have no clue how accurate but seems to match up to what OSCAR tells me when I analyze my CPAP data as far as respiration etc. Does more of an average during the day, the chart indicates it checking it a lot less often. When I got to sleep it tracks it very frequently and gives a much more details chart for the sleep time. I also find myself using the fitness side of it, that along with better sleep and more comfort knowing my o2 levels at night. Now when the watch buzzes to get more active I get up and move and do some excersize. I am drinking a lot more water since it will track it every day, trying to go up and down the stairs a lot more to meet its stair goals. Hopefully will motivate me to get in better shape.

Thanks to all for sharing your experiences! I have Oscar downloaded but need to get an SD card for my machine! Garmin Vivoactive 4 sounds good too. However large is it? Do you have challenges sleeping with it on?