Hi guys. I have been suffering from transitional sleep apnea sice last year. Least to say its been overwhelming! I been through a sleep study that proves all my apneas has occured in first ten minutes of sleep. I was labelled as a mild obstructive sleep apnea sufferer and told to loose weight. Needless to say i sprang at the opportunity to heal myself and lost 12 kg. Well im still gasping for breath at sleep onset. I visited an ENT who who dismissed my case and said he would charge me more if i refer to google!!!. Well in South Africa they have not heard of sleep onset apneas. Is there anyone out there in South Africa who has this form of sleep apnea i can connect with?

I have not seen your charts so this may or may not apply to you.

It is not at all uncommon to see multiple events in CPAP charts when one is in the zone between being awake and asleep. We call the "Sleep Wake Junk" or SWJ for short and typically tell people it doesn't count toward their AHI and to ignore it. Your issue is not that this is occurring, but that it is disrupting your ability to fall asleep. With CPAP this would likely be resolved with a slight increase in pressure.

Do you have a tendency to tuck your chin when falling asleep? If so, stop that.

If you have been diagnosed with mild sleep apnea you may want to consider getting a CPAP. Some countries and jurisdictions treat mild apnea and others do not. If you are having sleep issues related to apnea then getting it treated may be the better choice. A CPAP machine can be set up to deliver a fixed amount of pressure while you are awake, and then ramp to an automatic pressure control after you go to sleep. This should prevent any obstructive apnea during the transition period of falling asleep.

Hi. The problem is nobody has heard about sleep onset apnea . It is not the characteristic obstructive sleep apnea. On doing research I have learnt Tha such an apnea can be central and not obstructive. Or it can be both. The gasping at the beginning of the sleep cycle leads to constant awakenings. My medical aid wont cover a cpap machine because I would have to be classified a moderate sufferer. How accurate cam these tests be. I took a sleeping pill on the night of the test and that helps you pass through the first phase of sleep when I was suppose to show where my gasping occurs. If I know for sure a cpap can help me than I will have to buy it. Would not an automatic cpap machine be better so that no ajustments would need to be made?

I am not sure that there is any official designation of sleep onset apnea being a condition independent from sleep apnea. That said there can be issues with the handoff of breathing control from a semi manual to the automatic control during sleep. You are correct in that it could be central or obstructive. I suffer from both, but they certainly do not occur in any significance when going to sleep. Centrals tend to be more likely toward the morning. And, just personal experience but I find central apneas end smoothly with breathing starting again, not with gasping for air and arousal. I am just judging that based on observing data from my CPAP using SleepyHead software.

Yes an automatic CPAP would be the better choice. Just make sure you get one that distinguishes between central apnea events and obstructive apnea. If you had one, or could trial one, and viewed the data in SleepyHead you would likely find out what type of apnea you have, or what is causing the issue when you fall asleep. Both the ResMed and Phillips DreamStation machines can distinguish between the types of apnea. The unfortunate part is that a CPAP can really only correct obstructive apnea. The ResMed does have an EPR function which cycles the pressure higher on inhale and lower on exhale. That can to a very limited degree help with breathing effort when the body is not (during a central event). It might be enough to avoid a central during the transition from being awake to sleeping. If the events are obstructive in nature, then the pressure alone will be helpful in preventing any apnea.

Thank you Sierra for all that valuable information. I just wish I had a straight forward obstructive apnea as its so much easier to treat. The strangest part for me is that I can never sleep during any part of the daytime for even a second. The apneas are much stronger than and come to think of it the mornings are tougher to get sleep as the gasping is more severe. I am trying to stay positive in the hope that I will find treatment that brings me respite . This forum will hopefully help. I saw a whole lot of people with this sleep onset apnea crying out about their struggles and it just sounded too familiar. I dont know how to locate these people on the forum to hear about their progress. I'm just so glad I have you to help me navigate my way .

If you do a search here for sleep onset apnea, I suspect you will find a few threads. I recall it being discussed some time ago, but not recently until you posted. Many people post a few times but then do not come back to update. It is the nature of forums...

By the way Sierra , are central apneas not treated differently with a bipap rather than a cpap?

In the US there seems to be a progressive route that is prescribed I think mainly by medicaid and insurance companies. They like to give you a fixed pressure CPAP, and if that does not work, then an APAP, and if that does not work then a BiPAP. For the most problematic cases of central apnea an ASV machine is prescribed. My thoughts are that the only machine that has real significant treatment benefits for central apnea is the ASV. The others are pretty much the same, although certain types of BiPAP machines may behave a bit more like an ASV.

The basic treatment for central apnea is to avoid pressure. For someone that has both obstructive apnea and central apnea that is a problem, because of course obstructive apnea is corrected by pressure and centrals are aggravated by pressure. So where many end up is with a compromise pressure that is high enough to reduce obstructive, but low enough to minimize the centrals. I have a ResMed APAP machine, but I have found that I can control that compromise pressure best by setting it to fixed CPAP mode. For that reason I don't think an APAP is an obvious advantage. However it covers all bases as you can use it in either mode, and starting out in auto mode can help you find the compromise pressure sooner.

Essentially all the BiPAP does is increase the differential between inhale and exhale pressure. The CPAP and APAP are limited to 3 cm differential, but BiPAPs can go up to 10 or more. The problem is that this differential is a double edged sword. It makes the overall pressure higher, and can aggravate centrals, but at the same time it can simulate a breathing assistance effect which can reduce centrals. Certain machines can detect lack of effort to breathe and will trigger a backup cycle rate to assist breathing.

The ASV monitors every breath, and helps assist breathing on a breath by breath basis. It is the most sophisticated of them all, and often is the most effective with problematic central apnea.

This all said, you may not have central apnea at all. The normal way to measure it is in a lab sleep test. A trial APAP machine that detects central and obstructive apnea is often used as a confirmation method.

That's is an excellent idea to use an apap machine to test which apnea it is. Only problem is I wont get passed first ten minutes of sleep to measure anything. Taking a sleeping pill will give a false result. Maybe hiring that machine and finding a skilled technical to read it may be an option

One thing to keep in mind is that when a lab sleep test is being done you are not being "treated" with pressure. They are just monitoring your breathing etc and looking for apnea and hypopnea events. The other lab test is a titration test where they do essentially put a CPAP machine on you and use pressure to determine how much you need to stop obstructive apnea without causing central apnea. Not 100% sure but I believe they can start with a higher pressure to see if that prevents sleep onset apnea.

Also it is kind of the same with a home APAP. You can start with any pressure up to your minimum set pressure. or fixed CPAP pressure. If that pressure is effective, you will not experience sleep onset apnea. And with SleepyHead you will see if there is an apnea event or not. Same with an in lab titration test. The graph below is an example of my SleepyHead report from a few nights ago. You can see each breath, with the mask pressure cycling up and down with each breath (9cm on inhale, and 6 cm on exhale), until the machine detects I am asleep, and then it ramps up to my fixed CPAP set pressure of 11 cm on inhale and exhale. There is a bit of a disturbance in flow rate just after it switches to the fixed 11 cm where the green vertical line is, but no real apnea. If there was, you would see it. An apnea is 10 seconds or more with no flow. 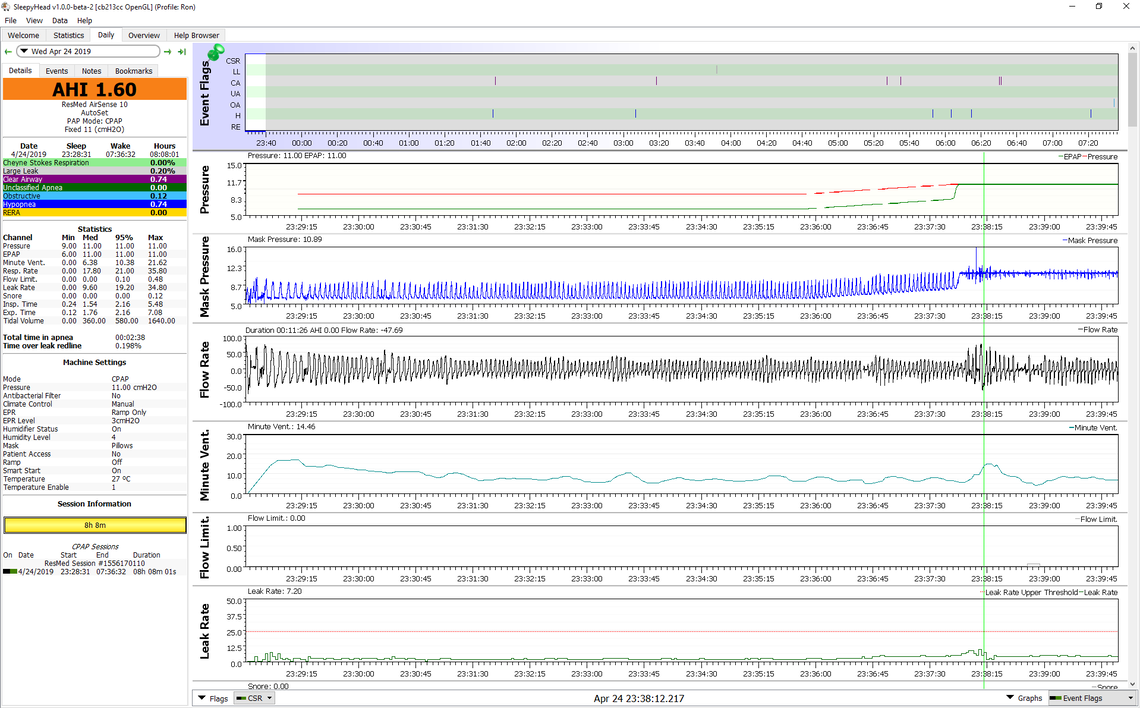 Hi sierra. Where did P3000g go to? I noticed you were communicating quiet a bit with her about 7 month ago. I was reading the forum this morning. She is pretty much in the same boat as me with the sleep onset apnea. Interestingly she was onto to APAp machine with no sucess. Then I just see inactivity on that forum. Do you perhaps know anymore. Regards

No, I don't have any further information. There are a lot of people coming and going on the forum. One would like to think that most stay until they have solved their issues, and then leave. However, there are probably some that don't solve their issues and still leave. I think CPAP statistics overall are not that good. From memory 30-50% abandon the treatment. Lots of unused machines sitting in closets somewhere.

Really . Doesn't leave us first time users with much hope. This is an excellent forum though. Learning a ton. Just hoping these guys somehow come back on to tell us their progress.