What parameters are affecting while generation of Cheyne Stokes.

Is see that the company that makes this breathing simulator, IngMar Medical, makes 35 different standard patient models, but claim they can be easily tweaked based on specific needs. There is a Kussmaul Breathing pattern listed but not the specific Cheyne-Stokes Respiration. But they provide a link to contact them for specific requests.

The ResMed AirSense 10 does detect and report CSR, but it is not always accurate. Have a look at this thread which shows some sleep reports from an AirSense 10 reporting CSR (areas highlighted in green). I believe a standard CSR is waxing and waning breathing effort with central apnea events between them. The events reported in this thread do not have the smooth waxing and waning, and also have obstructive events between each cycle instead of central events. To me a true CSR pattern is a sine wave of smooth breathing effort with CA events between more of them. In other words breathing effort is reduced until there is no flow, and there is no obstruction.

The Phillips DreamStation machines report Periodic Breathing instead of specifying it as CSR. I'm guessing that the reason is that their detection method is really not specific enough to be sure it is CSR. ResMed are reporting it, but perhaps not always correctly.

I am a mechanical engineer, and not a medical professional, but CSR would seem to be easy to simulate. You would just use a slow sine wave function to drive breathing effort. The speed of the wave and time between waves would need to be about 12 seconds or so to allow the apnea machine time to identify a central apnea event. Here is an example from my personal sleep reports of what I believe a true CSR event looks like. In this case the ResMed has identified it correctly as CSR. 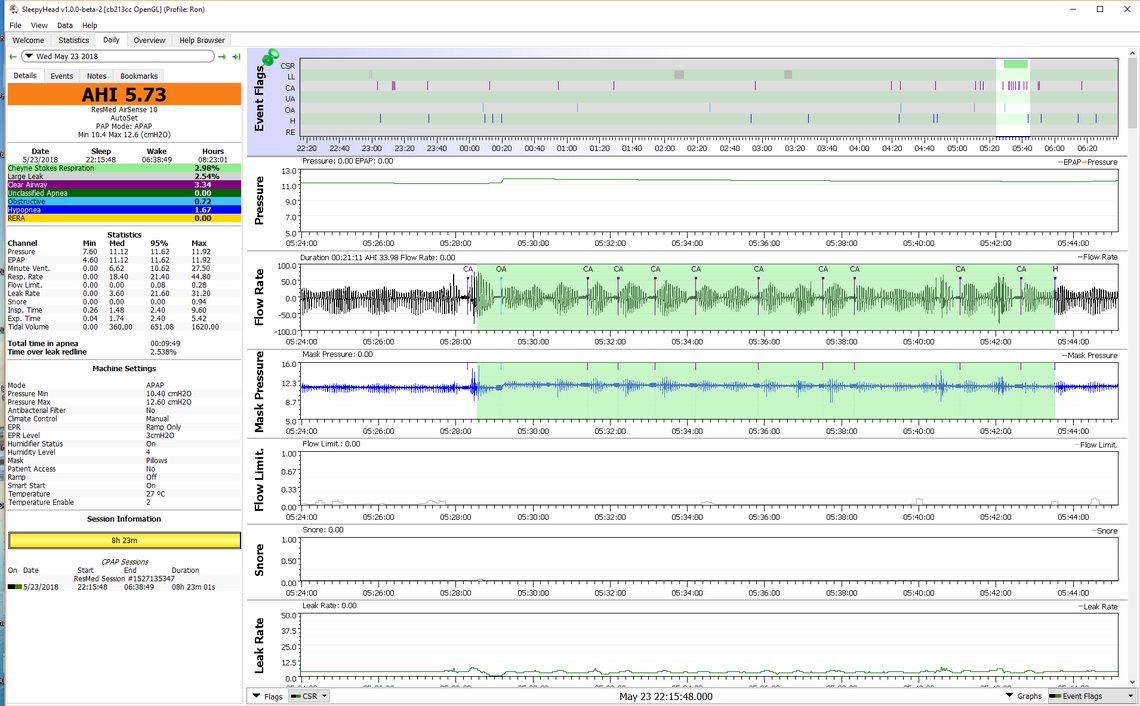 Can you please provide some more clarity about the topic or else if you have any .vr3 file of cheyne stoke can you share to me. I would also like to know what parameters we should change, so we can be able to generate Cheyne stoke graph.

I am afraid I don't know much about the ASL 5000. I just use a software program like OSCAR to view my data.

Ok sierra thank you for your suggestion.