I've been using the Airsense 10 for about 2 years now. For the first year, I rarely, if ever, had a leak rate over 24L. I've been using the Dreamwear nasal cushion mask the entire time, replacing it and the tubing, etc., every 3 or 4 months. For some reason, about 8 months ago, my leak rate shot up, and is rarely, if ever, below 24L. I was still getting the happy face, but leaks were up to 35L a night. I ordered a new mask, etc., and same thing. Thought maybe it was my new pillow, but nope - same with any pillow I tried. I was sleeping more on my side, but that's it.

Fast forward to a new sleep study about a month ago. Same mask setup at the sleep center. Stayed on my back all night, and they reported ZERO leaks. Came back home, and once again I was up around 32-34L. Then a week ago, my sleep doctor upped my pressure from a high of 10, to 15 (I'm now about 12 every night), and my leaks are off the chart - About 42L with frowny face a lot of the nights.

It doesn't make sense since all the equipment is the same and the first year I was fine. I get that the higher pressure would push it even farther, but that doesn't explain the last 8 months - or the zero leaks at the sleep center.

I'm starting to think it's my actual CPAP, even though it's only 2 years old. AHI has remained about the same - typically between 1.5-2.5, though occasionally higher or lower. (not over 5)

Any input would be great.

Are you using SleepyHead to track your daily results? If so, could you post a daily report screen that shows you leak rate through the night? I am wondering if it is possible that you are opening your mouth during the night and letting air escape that way? Here is a clip from near where I started with this same machine using the P10 nasal pillow mask. That second event large leak event starting just before 23:40 and ending just before midnight is probably the classic open mouth leak. It starts suddenly and ends suddenly with a relatively flat top to the event. A slowly increasing leak is more likely to be the mask slipping out of place as you put pressure on it with the pillow.

I don't believe I am, since I've been taping my mouth..... I guess that could happen, but it's been the same for the last two years, so not sure why the change this past 8 months. I'll load the data when I get home tonight.

Good morning. I wasn't able to upload my data last night since I got home late, but will try tonight. I did try the P10 mask last night, to see if it made a difference. Well, it did, alright - it was even worse! I only had it on for an hour since the nasal pillows were bothering me and I decided to check the leak - 47L! And, I was on my back the whole time with my mouth taped. (down the middle). What gives????

Is there someone else that could check for leaks when you are sleeping? Those leaks are pretty significant and at 12 cm someone not sleeping should be able to hear them and locate the source.

This was last night 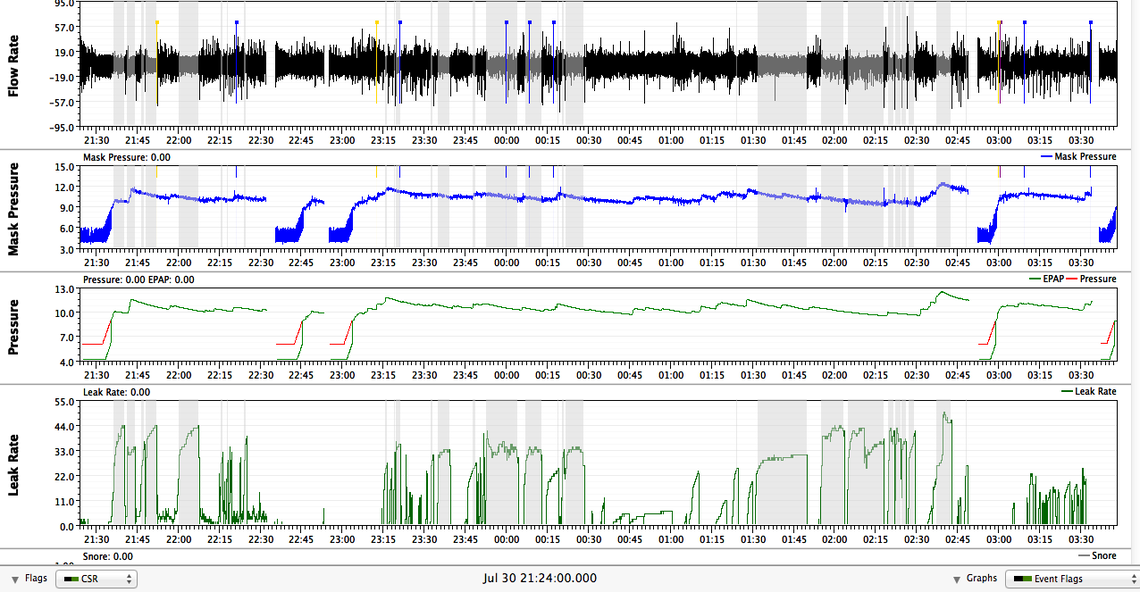 I also find my P10 mask which I am now using with Swift FX headgear is pretty sensitive to headgear tension. I was having trouble with excessive leakage and I just tightened the straps some and it made a big change for the better. 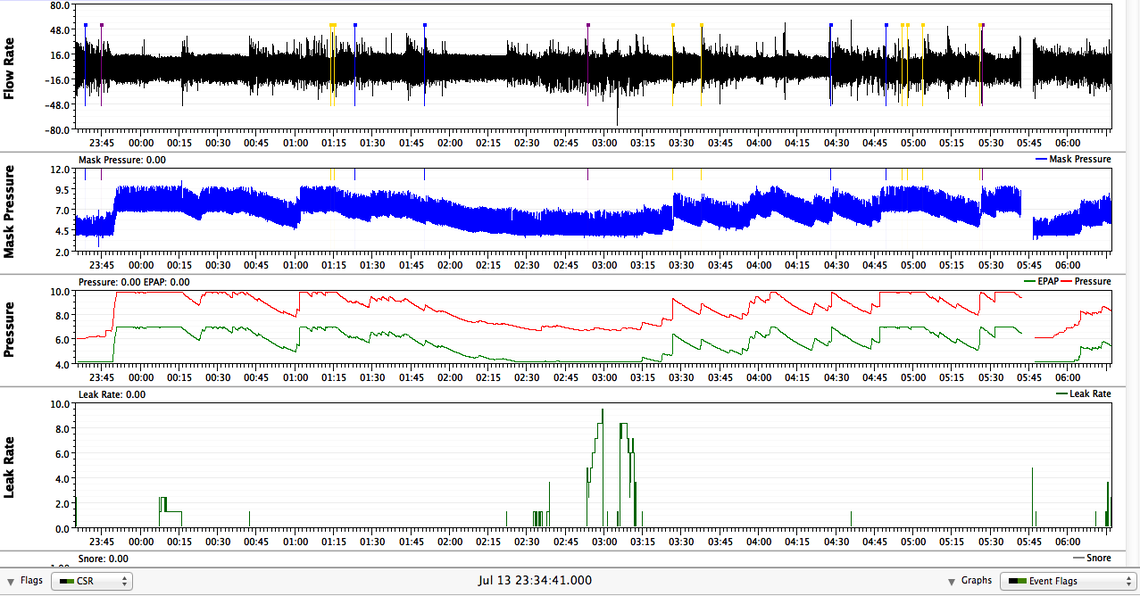 Yes, probably not all, but I think at least some are mouth leaks. I recall you said you were using a piece of tape vertically, but not totally across your mouth. As a first check I would try two pieces of tape horizontally to cover the whole mouth. Fold over one end of each piece a little bit so you have something to pull on to remove the tape when needed.

Using larger tape may be a more permanent solution, but for now I would try this to see if it helps with the leaks.

Not sure if the feature is available on the Mac version, but on a PC if you right click on the vertical number scale of the Leak graph it brings up a check list. I find it helpful to check off the box to display the leak red line. I consider leaks below that to be in consequential, and those above that needing some attention. It just draws a line at 24.

Hi- I'll see if I can get the leak line tonight. If so, and if I have a ton over 24 (which I'm thinking I might), how can they be addressed? I know that the increased pressure must be causing some of them, but the over 24L started well before the pressure change...... So frustrating. I just want to feel rested. Too many Respiratory Events, even when my AHI is low :/

My experience for whatever it's worth: I'm a side sleeper by (strong) preference, but I notice when I do sleep on my side the leak number skyrockets, and when I wake up A) the air pressure seems really high (10 - 12), and B) the mask, although attached properly, is leaking, in part because the pressure from the machine is so high it's pushing the mask away from my face creating small leaks. If I sleep on my back I don't have the problem of leaks, although I find it uncomfortable.

Could be air escaping through your mouth or lips. Other problem is side sleeping will sometimes knock the mask. Sleeping on your back is worst for most as it is inclined to cause the throat to close and air will try to escape through the mouth or lips. Chin strap (a good one) or a cushion for the neck will help keep the mouth shut, but will not stop air escaping through the lips.

So, sleeping on your side can knock the mask, but sleeping on your back can cause the air to escape through the mouth........ Where does that leave me? :) Seems like I may have an issue any way I sleep....... :/