All Things Being Equal?

All things being equal is an assumption that rarely holds true.

I have three different CPAP machines all set to deliver the same fixed pressure. (13 cmH2O)

For a long time now I have been gasping for breath with one of them, especially when I first put it on, and when I have slowed down my metabolism enough to survive it is still barely enough.

I have had occasion to switch machines a few times in recent weeks and the difference was really profound.

A few nights back I finally became frustrated enough to do a direct comparison of the actual airflow using the same mask.

Even when I removed the filter from the problematic machine it still delivered a significantly reduced airflow yet it was running at the prescribed pressure.

Is it possible that the machines become less effective over time with airflow yet still deliver the required pressure?

Could the pressure readout be inaccurate?

Is there a verification process to test a machine at home?

How can we trust the numbers?

It should be fairly easy to measure the pressure you are getting from your CPAP, especially if you have a nasal mask. You would need a length of clear plastic flexible Tygon tubing, like the kind that is used in wine and beer making. Make a loop with the tubing and fill it with water about half way. You may need some help measuring but essentially what you want to do is put one end of the tubing into your mouth while the machine is running. The pressure should drop the level of the water in the side closest to your mouth and elevate it in the other side of the U-Tube loop. Then you need to measure the difference between the two levels. 13 cm pressure should measure at 13 cm. If you want to get really fancy you could attach the tubing to a board with a ruler between the two sides to make it easier to measure.

I think inaccurate pressure is the most likely cause of what you are observing. The other issue possibly could be slow response of the machine to sudden demands in air flow. My observation from SleepyHead is that when we first go to bed and turn the machine on, we take much deeper breaths than after we settle down and go to sleep. Some machines may respond better to those deep breaths. But on both my A10 ResMed and my wife's S9, I see some significant pressure fluctuations especially when first going to bed.

Oh clever! You know way too much Sierra! :P

Impressive, Sierra! Is your day job as an engineer, physicist or science teacher?

I reckon he was putting in some extra fenceposts to keep those bears out and while he was dropping the posts into the holes in the rain he figured it out, although a gumboot full of muddy water is hardly an accurate scientific measurement. :)

Retired mechanical engineer. Problem is that I am retired so long that I forget this stuff...

At least it's not half empty.

Sorry about the 'glass half full' joke Sierra.

To be quite frank I don't properly understand your instructions above.

I'm definitely not the brightest cookie and I'm rapidly running out of marbles so maybe there is a simpler way for me to figure things out?

It is just a type of pressure measurement called a manometer. Have a look at the illustration below. The manometer on the left has equal pressure on both sides and the water level is the same. The one on the right has more pressure on the left. The amount of pressure in cm of water is indicated by the distance "h" measured in cm. With a CPAP on, and using a nasal mask, and the tube in your mouth, this type of manometer will measure the pressure being delivered by the CPAP. 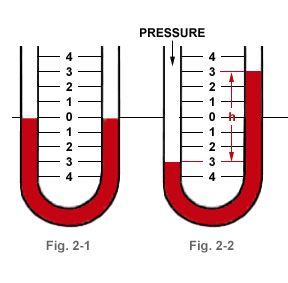 I am getting sooooo dense! It took me till now to understand what you were so simply explaining.

Yes I have used water levels on building sites in the past but was picturing the clear hose somehow connected from the CPAP yet in the mouth which didn't make sense.

So I just hook up the gear as per usual to the nose and test the pressure as it escapes through the mouth!

Yes, that is correct. You have to seal the tube to your mouth so it does not leak and just breath in and out normally. If you have your CPAP set to a fixed pressure with no EPR it should be fairly constant although it will probably fluctuate a bit as you inhale and exhale. If you have EPR turned on and set at 3, then you should get about 3 cm higher on inhale compared to exhale. The normal set pressure of a CPAP is based on the inhale pressure.

You're not dense at all - we all learn differently!

Now I'm going to lose sleep trying to figure out if I should tick all of the above or none of them! :)

I planned to get some clear hose and kept putting it off then I decided I didn't need any. A simple bucket is all it takes to measure raw pressure output and, from a cold start, at least 2 out of 3 of my CPAPs are up to pressure prior to adding the mask.

I'm not sure if they maintain it with different power supplies or after several hours of fluctuating power and heat but hopefully, they will. I'm thinking that I should take any weak links, like power gangs, out of the equation.

Then there is the query as to how to ensure sufficient airflow because, in my world, it's possible to sustain pressure in an enclosed space without any assurance of airflow.

The ResMed CPAP's measure air flow and mask pressure, which can be viewed in SleepyHead or OSCAR. Pressure does in fact sag and peak a little as air flow changes, but not by much.