I have been using CPAP therapy for many years, last year I replaced my old machine with an Air Sense 10. Shorty after I had the new machine I woke up one morning and the machine was off. I am positive I turned the machine on before I went to bed. There was not a power failure, but I did not have an answer as to why the machine was off when I woke up. I decided the cat might have climbed on the night stand or I somehow hit the button in the night. After this incident I decided to use the auto start feature, if the machine somehow turned off it would start up automatically.
Recently there have been several times where I have a low number of sleep hours. I check the logs in Sleepy Head and see I have unexplained periods where the machine is off. I don't recall getting up in the night, there are no events before or after these machine off periods. The times the machine is off can be 20 minutes to an hour and a half. I can not figure out why the machine would shut off.

I would think that if the mask became loose from my face the noise and/or sensation of the air rushing out would wake me.
Has anyone else had periods of time where the machine shuts off?

Yes, my wife had had problems with her ResMed S9 machine. However, it seems to be limited to times when we were off grid in a trailer and she was using a 12 volt to 24 volt converter, rather than the 110 volt to 24 volt adapter that comes with the machine. Through a lot of testing I determined that the adapter protection circuitry was deciding the machine was drawing too much current. Without going into the details, I a replacement which also did not work, and eventually got a third converter. It does not work either. I have measured the current draw and determined that it simply cannot provide the current that it is rated to provide. It trips out on overload well below the rated capacity for current. With three converters not able to do the job I finally decided that there is a design problem with the S9 12 Volt DC to 24 volt DC converter. I also determined that the limitation would be worked around by turning off the humidifier and heated hose. With those turned off, the machine draws far less current, and seems to work fine. I was going to bring it to the attention of ResMed but since the S9 is now an obsolete machine, I decided it just wasn't worth. it.

During this time I was using an A10 machine and a similar 12 volt to 24 volt converter and never had a problem, even when using a heated hose and the humidifier. I also determined that the A10 had a very similar current draw as the S9. Whatever the problem, it seems it was corrected with the A10 adapter which is very similar but not identical. It has the same rating.

So, back to your problem. Are you using SleepyHead or OSCAR. I found that very helpful in diagnosing what was going on. My wife has always used the AutoStart feature, and that was the characteristic of the problem - multiple stops and starts during the night. I would suggest looking at the data on you SD card with one of these programs. I also would suggest you turn off the humidifier and heated hose to see if that "fixes" the problem. If it does, it would indicate you have a defective power supply adapter.

My machine turned off again last night, this morning the info screen said it was only on for 2.5 hours. I called the sleep officer, to see if they could offer any insight, and they really didn't have an answer. They told me to keep the auto start function turned off. The mask could be loose, but I did run a mask test earlier in the day when I replaced the cushions.
I used Sleepy head to look at the logs, there were two on/offs. The first being when I turned it on when I went to bed, it shut off, and then back on just before I awoke. Then back off when I turned it off. No indication of major leaks. I can't believe I slept four hours with the mask on my face without the machine turning back on and without me noticing.

This mask seems to not fit correctly as it is, I was thinking it was because my hair had gotten so long and so bushy because I couldn't get a hair cut. I ordered a different mask and it should arrive soon.

Hi Sleepea! Let us know how things go with the new mask. I hope this resolves the issue...

Machine shut off during the night again. I called the supplier and they do not have an answer. They said I could bring the machine in for them to look at but I don't know what they are going to tell me.

I have an issue with leaks as well, and the mask is tight on my face. The problem is it isn't nightly, so I can't narrow the problem down.

The Resmed9 may be obsolete but I think there are still many thousands of Apnea patients still dependent on them. Mine shuts down from time to time and, because of the severity of my Apnea, it wakes me up almost immediately.

The manufacturers responsibility does not end when they cease production.

If you had 'brought it to their attention' do you believe they would have responded in any meaningful way? As your hesitance implies they have had many years during which, I presume, they have received valid complaints and reports. If they had a clearly defined responsibility to their customers, or their products, they would have already addressed these issues.

How is it possible for the CPAP industry to ignore these basic safety requirements?

There are obvious issues with the more recent machines that are not yet 'obsolete'. How are they being resolved and who is responsible for any potential risk to health and safety?

Is there an effective follow up system that I am unaware of? Does it extend to machines sold outside of America?

I think I might have found a clue as to why the machine is shutting off.

Last night, I awoke after a few hours of sleep. The machine was off, the CPAP's display was lit with a message on the screen. The message said something about the hose being blocked. I don't keep my phone near the bed, so I did not take a picture. I was so tired I just wanted to get back to sleep. I inspected the hose looking for a kink or to see if the hose was bent but couldn't see any obvious reasons for a blockage. During this time the CPAP's screen saver turned off the display. When I tried to "wake up" the screen it cleared the error. I don't remember the wording of the error but at least I have a clue as to why this keeps happening.

I did a search and I see others have this issue as well. (links below) Some people have suggested it isn't a kink in the hose or a blockage in the hose but the vents near the mask are obstructed. This could be my issue. I clean the vents with a toothbrush each morning, I know they are clean. What I think might be happening, I have always slept with one hand on my nose or forehead. I don't notice I am doing it, I just rest with my head in my hand. I could be unknowingly covering the vent holes with my hand causing an obstruction and the machine shuts off. This may or may not be the issue, but it makes sense. At least I have a direction to look and something to test.

This error was mentioned on the forums before: https://myapnea.org/forum/hose-blockage

Others have had the problem: https://www.google.com/search?q=resmed+hose+blocked

At least I have something to go on.

Looking in the manual's Troubleshooting sections I found this: Device message: Tubing blocked, check your tubing

Solution: Air tubing may be blocked. Check the air tubing and remove any blockages. Press the dial to clear the message and then press Start/Stop to restart the device. 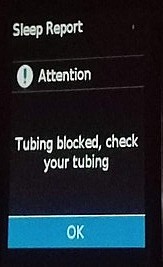 It happened again last night, about the same time as the previous night. Last Thursday I switched from a F&P mask to a ResMed mask, I switched back to my old mask and will see if the problem stops.

The machine stopping happened with my F&P mask, it just seems to happen very often with my ResMed mask,

It seems difficult to imagine how the tubing could be blocked, unless it gets kinked when you are sleeping. I guess it is possible if there are sags in the tubing that could allow water to collect, the water may block the hose. However that seems unlikely without noticing a flood of water coming through the mask. Seems like a bit of a long shot but there are silicone seals between the water reservoir and the machine that possibly are not in good condition. This Technical Manual may be of some help in inspecting the machine, if you don't have it already.

New hose, new mask, and new water chamber, the machine is about eight months old. I have had washout or water in the hose issues with my last CPAP, and the current machine. Both times there was a gurgling sound as I was breathing, this woke me up and I corrected the problem.
Right now I am focusing on the mask, I have returned to using my old mask. Last night I did not have a problem. I will continue with the old mask and see if the problem returns. As a stomach sleeper, the new mask might not be compatible with me.

In the above error the sleep center did not see the error reported, it only showed that my machine shut off.

Which specific mask is working and which one is giving you the trouble? I had one other thought after my last post. Is there any chance the A10 is not set to match the type of mask you have? This Compatibility List shows the ResMed masks. For other brands you would have to match by mask type, or possibly even matching by the vent flow for the specific mask, and find a ResMed that matches as closely as possible.

hi, sleepea, did you ever figure this problem out? seems like about the same time you started having this problem, we started having the opposite problem, with the same type of unit. our CPAP machine won't automatically shut off anymore. it just spontaneously started doing this. the sleep specialist doesn't know what's wrong and says they can't help us because of covid-19.

What kind of pressures do you use? I suspect the auto shutoff is based on a flow switch. If your pressure setting is lower then flow will be lower and it may not be enough to shut the machine off. That said, it should be designed to work across the pressure range of 4 to 20.