Hi everyone. I just recently received my ResMed Cpap machine and I cannot sleep with it. I have the nasal pillow. How long does it usually take to get used to using a Cpap. I’m getting maybe 2 hours of sleep a night. It’s gettinf fairly stressful for me and I’m starting to feel a lot of anxiety over it. Any guidance or advice would be much appreciated. Thank you in advance.

Sorry to hear you are having trouble sleeping with it. It takes a few weeks of getting used to....at least for me it did. But, I got more and more sleep each night during those few weeks, so don't think you are destined to get 2 hours per night for a few weeks. You'll learn little tricks each night too. For example, with my full face mask, rather than sleep on my side with my head dead center on the pillow, I sleep on my side, but with my face close to the edge of the pillow. This leaves the mask to kind of hang over the edge of the pillow, unobstructed. You'll pick up little things like that as you get used to it.

Also, if your pillow is super-squishy, you may find that a firmer pillow is better for you and helps to leave the mask alone as you sleep.

I'll let the true experts in here add their experiences. Just wanted to instill a bit of hope in ya'. For me, it's second nature now. Almost like nothing is on my face. It will get to that point for you too. Just hang in there.

Thank you so much for your words of encouragement and advice! I will keep on trying. I’m just such a light sleeper any way I think this is just an added thing to keep me awake. BUT I gotta keep on trucking!! Thank you again!!

Set yourself up with your CPAP and use it under pressure while you are reading, watching TV, or playing games on your phone. You don't have to sleep while doing this. The Idea is to do something pleasurable while "using" your CPAP so your body and you can learn that this is not a bad thing.

Another thing, you are at 2 hrs, give yourself a reward when you get to 3 hrs.

I like to look at the charts to see if something is going on. I use Sleepyhead to do that ( https://www.apneaboard.com/sleepyhead/ ). Also, what are your settings? Frequently we see they are set to low for comfort.

Hi Bonjour. Thank you for replying and your advice. I like the rewards idea! Haha!!

I am using the ResMed AirSense 10 Autoset and my numbers that were set by the doctor are air pressure at level 8 and humidifier at level 4. I am using the nose pillow with this machine. I have a follow up appt with my pulmonary doctor in a month so I’m hoping I will get used to it by then.

Thank you so much again for taking the time to respond!

I think the ResMed offers some of the best features for CPAP comfort, providing they are set up properly. If you can provide more information on how your machine is set up and what is preventing you from sleeping, we may be able to help you out.

I am using the ResMed AirSense10 Autoset like you and it’s set at air pressure 8 and humidifier at 4. I have the nostril pillow with this machine.

I’m a very light sleeper any way so I think that contributes greatly to my problem.

Like you said, I think I need to just stick to it at least until I see my pulmonary doctor in a month to see what he makes of my report. Crossing fingers and toes I am able to have as much success as you and the other members here on this thread!

A pressure of 8 cm is not that high, and I'm sure you will get used to it. Normally an AutoSet has a minimum and maximum pressure between which the machine is allowed to adjust the pressure to your needs. However, they can also be set to fixed CPAP mode. You can tell pretty much how it is set up from the screen display you see when you turn the machine on. In the example below the minimum pressure is 12 cm and the max is 20 cm, so it is in AutoSet mode. The current pressure is 4 cm, so it probably was just turned on with a ramp start pressure of 4 cm. In the bottom left the icon indicates the AutoRamp is turned on so it will only use that ramp pressure until you go to sleep. In this case after going to sleep it will ramp up to 12 cm and turn the control over to automatic. In the bottom right the icon indicates the humidity is in manual at is set at 4. 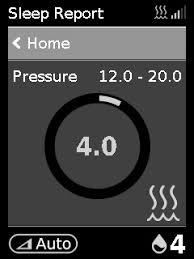 For maximum comfort, if you do not have it already, I would suggest using a ClimateLine heated hose. It will then default to automatic humidity control and you can set the temperature which is normally 27 C or 81 F.

For maximum comfort I like to start my ramp pressure higher than the default 4 cm. If you set therapy pressure is 8 cm, I would suggest using the AutoRamp with a start pressure of 7 cm. I would also turn on the EPR set to 3 , and put the EPR type to Ramp only. That way it will give you 7 cm on inhale and 4 cm on exhale which should feel quite comfortable. It will stay like that until you fall asleep. Then it will go to 8 cm and the EPR reduction on exhale will stop.

As Bonjour suggested you can get a much more detailed report of how you are doing if you download SleepyHead and copy the data from your SD card to view it in SleepyHead.

Thank you Sierra! I will try out your recommendations.

For some reason every morning when I take out my water reservoir for the humidifier the water is still at the same level. I touch the heating plate and it’s always cold as if it’s never been heated but when I look at my indicators it shows that the humidifier is workin properly. Do you get the same thing?

I use the ClimateLine heated hose, with the humidity control in Auto. I almost use the whole reservoir every night. I forgot to fill it one night and ran out of water fairly early in the night. The reservoir got very hot and stunk so much I thought we had a fire in the house. Then I thought the machine was on fire. But I finally woke up and figured it out.

What you might want to try first is turning the humidity up higher, and see if it makes a difference. If it is too high you can get condensation in the hose.

If there isn't any water usage and the plate is always cold, then it isn't working. My machine empties the chamber every 3 days. Something you might have checked other than relying on the indicators. Just a suggestion.

I have a Resmed 9 that had a humidifer that stopped working. I would wind it up to 4 or beyond and it would work fine but when I dropped to less than 4 it would just stop working again.

I'm using a Fisher and Paykel Icon now and the humidifier is warm all day long.

I must admit that the icon-based menu on the Icon CPAP annoys me to no end. Also the humidifier chamber is hard to clean and the lid can be fiddly, but otherwise it's a fine machine. Did you know that it can work as a clock and play your favourite music as an alarm?

When I was diagnosed and given a trial machine it was the F&P SleepStyle which had just come on to the market to replace the Icon. I don't believe it detects central apnea either. I returned it because of the price, but that was a fortunate thing, as now I know it really would not have worked well for me, as I have issues with pressure and central apnea.

In any case, I know you like to read those real technical articles. You can find this information buried in this report. See figure 4. The machine designated as D6 is the Icon, and D8 is the ResMed S9. The right hand column of graphs shows how the machines respond to central (open airway) apnea events. The Icon significantly steps up pressure, while the S9 maintains pressure constant. Full paper at this link:

All APAPs are not Equivalent