Hey folks. I've been using the Air Fit P10 which is very comfortable for my nose and works well for my sleep as I'm a side sleeper. However, the headgear sucks as it just stretches out and the mesh exhaust sections are a bear to keep clean. I tried the Philips Respironics Nuance Gel Nasal pillow mask. The head gear works better than the P10, but the pillows are uncomfortable to me and after a few consecutive nights of use my nose is sore. Anyone have any suggestions for combing the comfort of the P10 and the headgear of the Nuance Gel mask?

I'm not familiar with the P10. If you can lay them side by side you might find an option.

If you haven't already tried it I would suggest you fit the large pillows to the Nuance because they are intended to just float against the nose without too much pressure and without inserting themselves into the nostrils.

You might also fit packing of some kind (like a round silicone spacer) to the side of the pillows against the upper lip to keep the pillows at the right angle to the nose because the straps tend to float the mask at the wrong angle sometimes.

When I first tried this idea I experimented with a small ball of blutak to get the right position and angle before I applied a more permanent solution.

Wash the headgear for the P10 it will shrink.

Interesting. I was just about to compose a post comparing the ResMed AirFit P10 to the ResMed Swift FX nasal pillow mask. I have used the P10 for about 9 months and also dislike the headgear. The rest of the mask is great. With that amount of use perhaps I have not had it long enough to plug up the vent screen. I just rinse it under the tap. I have managed the headgear problem in two ways. I cut the straps, overlapped them about an inch, and sewed them back together again. That helped a lot. However, I still was using a BreatheWear Halo chin strap for two purposes. One was to hold that flimsy headgear of the P10 in place. The other was to keep my mouth closed. It worked, but all that stuff is not that comfortable.

It was about time to replace the mask, and I decided to try the predecessor of the F10 which is the Swift FX. I think it dates back to 2010 or so. The P10 was supposed to replace it, but it really hasn't. I've now had two nights with the Swift FX. The headgear is much better, and it stays in place for me without needing the chin strap. The nose portion is almost identical. It seems to stay in place quite well when you side sleep. The only issue with the Swift FX that I don't particularly like is the vent on the elbow. It is a series of holes at a 45 degree angle, that are designed to blow air down toward the hose rather than straight out. I had read that the mask was more noisy than the P10. I did not find that to be the case, or perhaps I am going deaf! What I did find is that while the P10 diffuses the air so there is no real velocity to it, the Swift puts it into a high velocity stream, like a garden hose set for distance. The problem comes in when that high velocity stream of air hits the bed covers, or your hands or arms, it makes noise, and a fair bit of it. The first night I used it, I was quite bothered by it, and did not get a great sleep. Last night it worked much better, as I did what I could to keep everything away from air stream. It was much better, and I got a reasonable sleep. Short story is that it is essentially the same mask as the P10, with a much better headgear, but a poorer vent diffuser system -- but I hope manageable.

The other nasal mask I have tried is the F&P Brevida. It has headgear that is better than the P10, but not as good as the Swift. It has a similar vent location as the Swift on the elbow, but it has a detachable diffuser that goes over the vent holes. Not perfect but is better than the Swift, and not as good as the P10 vent. The Brevida however bothered my nose more than the P10, and is larger and seems much easier to dislodge from your nose when you side sleep.

The headgear on the Swift FX does not seem to stretch. I have used the same headgear at least a year each time before replacing. My problem is that the Velcro strap needs to be shortened for my tiny head. Simple fix, but I can't see why they don't have a shorter strap. I can't be the only small head out there. And, yeah, the vent can make noise against covers, but is only an occasional annoyance. Vent has not clogged up, and all I do is soak/swish in warm soapy water and rinse every week.

Is it possible that the pink For Her strap might be shorter? They sell it in two versions and some think the only difference is the colour. It would seem to make some sense to make the For Her version smaller.

You will be happy to know I bought the blue version of the Swift FX. Actually for me the size was about right! The one difference for sure in the regular Blue version and the Pink For Her version are the mask inserts provided as part of the fit pack. The Blue version includes a small, medium, and large insert. The For Her version includes an extra small, small, and medium. I pretty much knew from my P10 that I needed the large insert, so the Pink one was not really a choice...

I did a quick check at CPAP.com and it appears the For Her headgear for the Swift FX does have a shorter backstrap. The silicone top strap is the same. A quote from the site:

The Nuance mask has at least two distinctly different styles of headgear. One with gel cheek cushions and one without.

Maybe some pink nail polish would stop the straps from stretching. (just joking) :(

It does make you wonder if the people making these products test them on live people that actually have sleep apnea. It's like being fitted in the beginning for a mask with headgear. They fit you (or did) while you were sitting up. It's a whole new ballgame when you lay down. Wearing one for a few minutes is a lot different than overnight for weeks. Is the patient ever actually part of the process of making and testing stuff like this? It really seems like different companies are just looking to make something different--not better.

The DreamWear comes in 2 versions - intranasal and under nose. Both have far more reliable headgear than either the Nuance or the P10. I have seen people solve the P10 problem by going to a fabric/sewing store and buying a roll of elastic which has button holes in it couple of centimeters (inch for our US readers). This can be fitted on to the P10 frame quite easily, works about as well as the normal head gear, and costs about 100th as much to replace.

Interesting idea. Are you saying the elastic band is two cm wide and it has button holes in it and you cut it to length to make a headgear strap? 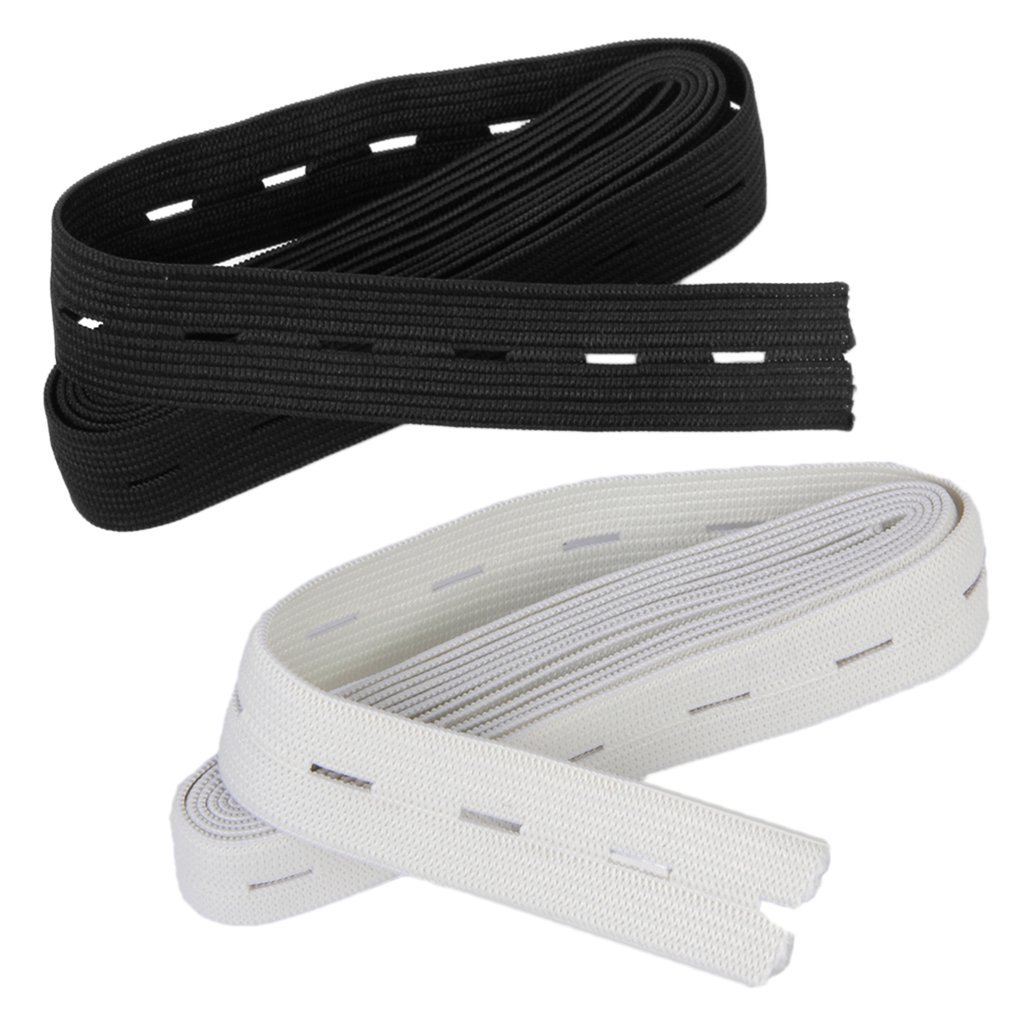 This is the best I could do on a quick look...

Now what can I get to keep my pink bed socks from falling down?

That's the stuff. I've had a few patients use it to good effect.

Thanks for the info on elastic sleeptech

I'm going to check out our fabric craft stores first chance I get.

You can never have too many options when it comes to headgear.