What is a reasonable replacement frequency for CPAP supplies?

I have been into this CPAP thing for over 9 months now, and my wife is around 4 years. She is on her third mask in 4 years. While I have tried 5 different masks, I am back to my original AirFit F10 nasal pillow mask. I am starting to think I need to at least replace the nasal pillow cushion part, but I really don't think there is anything wrong with what I have. I have never been happy with the headgear of this mask, and actually have modified it by cutting the straps and sewing them up to make a tigher fit. So, what I really may do is replace the whole mask with the very similar older design, Swift FX, to get a more adjustable and durable headgear part. Our insurance does not cover CPAP at all, so we pay 100%, and can replace any time we want to pay!

It motivated me to do some research on what is recommended for replacement frequency. Of course there is no shortage of recommendations from self interested parties such as manufacturers and suppliers. And they are very conservative as one might expect. I found one somewhat independent source, SleepApnea.org, which simply presented the US Medicare maximum allowed replacement frequency. It seems very very generous! Then I found a US Department of Health and Human Services, Inspector General, report which reviewed the US Medicare, and state Medicaid recommendations for replacement frequency. In short they found the frequency was far to frequent and all over the map when you look at the state Medicaid allowances. This table from the report kind of summarizes their findings. 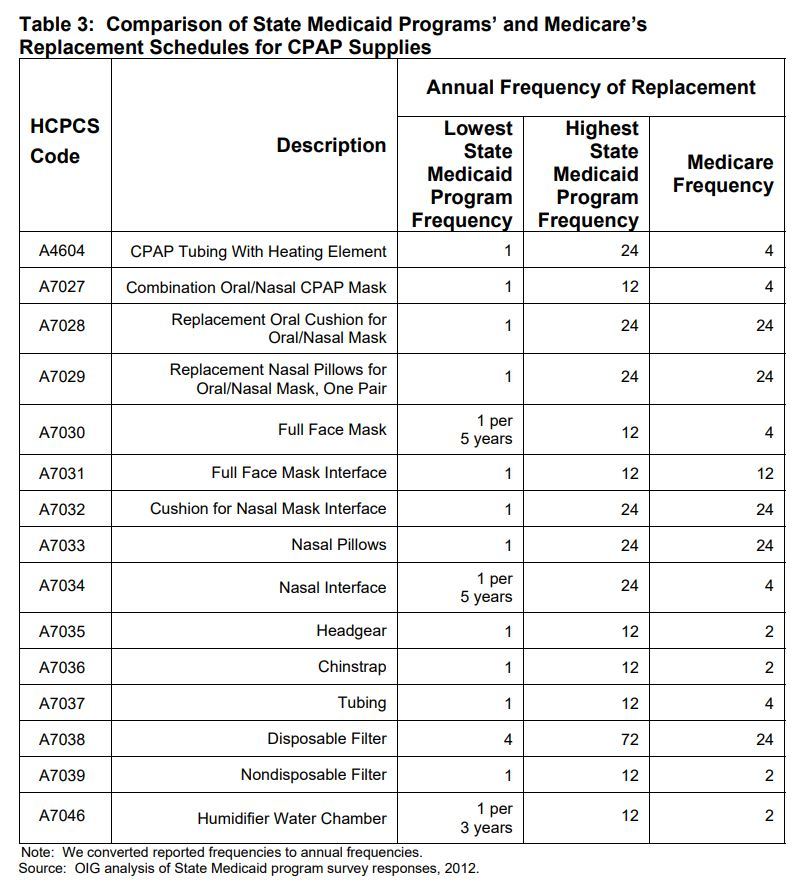 Wow! Some states allow heated hose replacement twice a month, masks and humidifier chambers once a month, and cushions twice a month! Seems incredible. My wife is using her original heated hose and humidifier chamber which are 4 years old. The lowest state allowance seems much more reasonable to me. And some of these components have a 1-2 year warranty. The Inspector General issued a report which has much more detail, and recommended a significant reduction in the allowance. It was rejected. To be fair, these frequencies are maximum, and the clinics are expected to only replace as necessary. More money in their pocket though, if they replace often when not limited by Medicaid or Medicare.

So, if you were controlling the purse strings how often would you pay for replacement of the typical components?

I wonder why they didn't include the machine itself in that chart?

It's an interesting subject Sierra. One that I too have been pondering because it's part of taking better care of my budget, my equipment and myself.

I'm in much the same situation as yourself in that I have to pay for everything (except the machine) and at the moment I've switched to a machine I have paid for because the original Resmed 9 became too dangerous to use.

As well as considerations of cost I am conservative by nature so I agree that the lowest frequency generally makes the most sense.

However I think there would need to be scope for higher frequency in some circumstances because, as you have experienced, not all headgear is designed to function properly and some deteriorate more rapidly than others especially if you wash it too frequently. (which I did with my first one)

I just switched to my third Philips Nuance and it makes a stupendous difference although it's exactly the same mask.

It seats and seals far more easily and leaks a lot less during the night and it feels more comfortable and more secure.

Yet I still consider the old mask to be functional, I used the first one for far longer, so what was wrong with the second one?

A bunch of little things. The elastic in the headgear has become a bit slack and the velcro isn't quite as sharp anymore and the cushions are not as bouncy as they used to be.

Each of those things on their own is relatively minor and, as you have implied, can be rectified with a little improvisation, but the overall effect was turning into a nightmare.

So yes annual replacement of most items would be a wonderful upgrade for me as long as there was scope for earlier replacement of badly designed gear.

I think the purpose of that Inspector General report was to focus on the less durable, more consumable components needed for CPAP. That SleepApnea.org link did include the Medicare replacement recommendations for the machine and humidifier. A quote:

Those intervals seem reasonable to me. On other equipment, I'm quite sure I could make my AirFit P10 last a year, but I am getting a bit fed up with it. It is probably due for a cushion replacement, so it is either that, or a complete new mask. I placed the order today for a new Swift FX. I hope it works. It seems to get good recommendations from this cpapreviews.org site. The author of the blog claims to be a cpap user, and has used both the P10 and the Swift FX. I hope he is right that it is a good mask. I recall another contributor here, SnuzyQ, had good things to say about it too. This will make #6 that I have tried!

Turquoiseturtle +0 points · over 3 years ago

Working just from memory here, as I'm sitting by a warm fire and don't want to go check supply replacement policy. I know for sure the nasal pillow and filter allowance is once per month. I believe humidifiers were every 6 months, as is a regular hose. I think headgear is every 4 months. The pillows do seem to get wonky after about 5 weeks, but the other stuff, not so much. I replaced the humidifier, hose and headgear after 2 years, when AHI went up (from less than .5 to between 3 and 5). That did not solve the problem. Now back down to about 1. It does seem my coverage is far more generous than needed.

I don't know what the replacement time is on my mask, headgear and hose but I do know that they last longer for me than is recommended by the companies. Laziness and expense on my part.

CPAPs and related equipment (masks, humidifier chambers, tubing etc) only really NEED to be replaced when they don't work any more. How often this is varies wildly from one person to the next. I have some patients who manage to wear out a mask in 3 months and others who have the same mask for 10 years and it still looks pristine and works a treat. Those replacement frequencies you quoted, Sierra, are just ludicrous, and there is no doubt in my mind that is simply a ploy by the manufacturers to push more product. 2 hoses a month! You could open your own shop at that rate, especially if you had a large family all on CPAP machines. Even the manufacturers only recommend replacing your mask once a year.

CPAP is very simple mechanically. As long as your machine blows the right amount of air, your mask and tube get it in to you and you sleep well, that is all that needs to happen. If your gear works and you're happy, why keep wasting money and resources on replacing it unnecessarily? In an age when it has become so obvious that we need to reduce the amount of waste we generate if we are to avoid destroying our planet, such profligate waste is very unethical. And if there was not this push for people to replace their equipment unnecessarily, we could instead replace stuff that actually needs replacing and still have far less wastage. Doesn't it seem stupid that one person is struggling with a busted old mask, or a new one that is totally wrong for them, when someone else (theoretically) has a cupboard full of new masks which they will probably never use? Maybe I'm just a silly idealist.

You make so much sense! I don't feel as guilty now!

And I thought you actually worked for one of them ;-)

Ha. I'm not sure if I could. I can be to honest for my own good sometimes. I work at a facility that provides studies and treatment to patients free of charge, so I have no vested interest in whether someone is treated or not, or in what form of treatment they use. My job is just to help, which is nice.

I've changed my mind about the frequency of replacing gear.

I reckon that if someone else was paying I'd want at least 3 masks per year till they figure out how to make some really good ones.

Not because they wear out but because most sufferers have so much trouble finding one that works properly.

I also pay for my equipment (got a break on the machine itself, but no replacements in the future). I can't imagine replacing on the schedule recommended so I'm relieved to hear people speaking out about this. After trying two other masks, I'm sticking with AirFit10 nasal pillow and hope to use this one for at least 6 months and maybe a year. I asked a supplier whether replacement was about breakdown in materials or hygiene, and she said mostly hygiene. But since I keep my supplies clean and don't share them, I am comfortable with longer use. It makes me a little crazy that Medicare and maybe some other insurances are paying so much for replacements that probably aren't needed, to say nothing of the waste that is created.

I got about 5 months out of my AirFit P10 before the headgear had stretched too much. I cut it in the part that has two straps, overlapped the straps, and sewed it back together again. I should say my wife sewed it back together again. I tried but failed on the sewing thing. The straps are stretchy and a little difficult to sew with a machine. Now at about 10 months I have replaced the P10 headgear with the Swift FX headgear. Still using the same mask frame and hose, and nasal pillow insert. I guess I should start thinking about replacing the insert - perhaps at a year or so. Suspect the Swift headgear will last a long time. It is pretty substantial compared to the original P10.

It would be nice to have health insurance.