Maybe It's Just Me 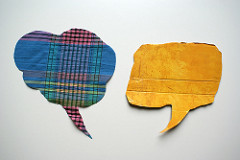 I have sleep apnea and use a full face mask. I am learning what it means to have sleep apnea and the dangers of being misdiagnosed or undiagnosed. I understand the health issues that can and often do go along with sleep apnea. I believe that I need to educate myself as much as possible because I am the only one who truly has control of my health.

I also have Restless Leg Syndrome and fibromyalgia. Maybe it's just me but people don't seem as ready to talk about having sleep apnea. I can start a conversation with someone who has Restless Leg Syndrome and we will compare symptoms, medications, treatments, and horror stories and leave each other feeling less alone. Talking with someone who also suffers with fibromyalgia might include foretelling weather changes, massage therapy, current medications available or pros and cons of exercise. I might even learn something new to try or pass on what works for me.

Again, maybe its just me. I see someone at the airport with a CPAP bag or see someone looking at mine but we don't connect. Recently someone told me they knew I used a CPAP machine because of the lines on my face from the straps. That did not lead to an informative talk about sleep apnea. Instead, I was slightly embarrassed. I don't know why--maybe it's just me.

All three of these diseases can affect sleep time with partners and there are all sorts of ways people deal with sleeping together when one partner has issues. Many supportive partners understand when the medications don't work or the massage therapy wasn't enough to calm the legs or provide pain relief. I hear of many people who don't get that kind of support with sleep apnea. Often, partners think that a CPAP machine should fix the problem.

Maybe it's just me but issues with mask fit or leaks, wrong pressures, nose sores, strap lines and dry mouth aren't taken seriously. It is assumed that everything should be just fine now that I have a machine that helps with sleep apnea. Maybe it's just me because I don't explain more to my spouse. There are great on-line support groups where people understand what I am going through. That isn't the same as having a face-to-face conversation with someone. Even then, the conversation is just not the same as the ones I have about Restless Leg Syndrome or fibromyalgia. I feel like I have only traded information with a stranger instead of finding a fellow sufferer.

There may be different stories to tell. I would like to hear from others as perhaps their interaction with fellow sufferers has been stronger and more meaningful. That would be great because like I said, maybe it's just me.

"Graphic Conversation" by "Marc Wathieu" is licensed under CC BY-NC 2.0.

Wow! I wish you the best. I was diagnosed with sleep apnea about 2 weeks ago. I clean houses and found that I would be pretty good one day and exhausted the next, barely able to complete cleaning one house or even make it through my day at times. It took going on a cruise with a friend of mine who is a nurse who has a CPAP machine. She said boy you snore loud and maybe you have sleep apnea. It was the same pattern even on the cruise. I thought for sure the nasal congestion, allergies and fatigue would get better on the cruise but one day I would okay and the next day wanted to go back to bed. My experience with a CPAP was kind of rough the first week. I am now doing much better the second week. Had a really hard time with mask fit and mask leaking which mea'nt l had trouble getting a good night's sleep. I changed the mask to a wisp nasal mask. I absolutely love it. It is the one with the fabric head strap. I have the airsense 10 ResMed CPAP that I bought on Craigslist and it is working great. It gives me a score of how well I'm sleeping. There are far less mask leaks since I changed masks. The thing that woke me up probably 10 times a night was a dry mouth and nose. My breathing is better on a cpap. Because of the dry mouth I thought maybe I was opening my mouth during the night but that is not the case. It is the air from the CPAP going into my nose that comes into my mouth that is making my mouth dry. I found zylimelts online. I use one or two in my mouth at night and sometimes if I wake up halfway through the night I use another one. They stick to your back teeth or gums slowly melt over some hours. They are all natural. It is for people who have dry mouth. I find it has reduced greatly my waking up at night. This way I keep water near me at night but I'm not waking up nearly as much. I still get a dry nose even though I've increased the humidity so the next thing I'm going to try it is a few of the nasal things that I've read about like aye nasal mist, etc. I need to research the best one. Slowly my energy is coming back. I do find if I go to sleep earlier at least by 10 or10:30 I sleep better and have more energy the next day. All the best to you and yes I wish there was more information out there. I had to look up a lot of things on my own. While I love Kaise they did a great job with a sleep study and gave me a mask. I had no durable medical equipment coverage so I was kind of was left on my own to find something that worked. Breathe California had a long waiting list for CPAP. I bought mine on Craigslist and saved probably $350.

bankseystheory +0 points · over 5 years ago

Over in the UK, very little is known about cpap and sleep apnea. People just don't realize that snoring can damage your health. When you mention snoring to people they just turn a blind eye to it and say everyone snores. Just an embarrassing subject. Only by being more open about it can we educate each other.