Thanks Usually,the machine shows green faces. The leaks appear only on the Oscar daily log as a percentage.

I had my CPAP pressure increased to 12-16 about 10 days ago. Since then, the AHI’s have been steadily falling very close to zero. Now they have been flat at 0 ( zero) for the last four days, with no OA’s and no HI’s, only a few RERA’s.
On the face of it, I am happy, but I also wonder if this is normal. If I continue to have 0 AHI’s , does it mean that I am cured? I am aware that in many, perhaps most cases sleep apnea is caused by the anatomy of our respiratory tract, that cannot be modified, but I also wonder if there aren’t other non-anatomical factors that can be eliminated by continued sleep therapy. Also, last night OSCAR reported a large leak at 0.78, but the Resmed daily report, which usually warns of large mask leaks, this time does not mention anything in this regard, with a score of 98%. I wonder why. Thanks

Yes, I might as well switch back to Full time as there isn't much of a perceived difference in having the EPR set at Ramp only. What I understand less, though is the Flow limitation issue and what it means to have the Flow limitation number doubled, along with the doubled pressure and the implications

Hi Sierra With the EPR still off, last night was very smooth. The only thing I noticed was an unusual very low pulse at wake up. Usually it is 60 bpm because I take a betablocker following an isolated episode of atrial fibrillation almost three years ago, but this time It felt even lower. It was also skipping a beat, although very regularly. I don’t know if it is related to the EPR setting and the oxygenation pattern. I don’t worry, anyway. For one thing, I am not new to arrythmias. I had a very unusual one recently, with the pulse shooting up and down between 90-130 bpm, accasionally 150 bpm, for about a week, with absolutely no symptoms. I rushed to the emergency, but the ECG indicated a perfectly normal heart. The doctor said I shouldn’t worry about occasional arrythmias or tachycardias as long as I have no symptoms, like chest pains, fatigue or breathing difficulties. She said the cardio watch is not a medical instrument. It doesn’t show the complete wave pattern It only picks up the irregular beats and it averages them out in a way that can be misleading. You can have a look at the report 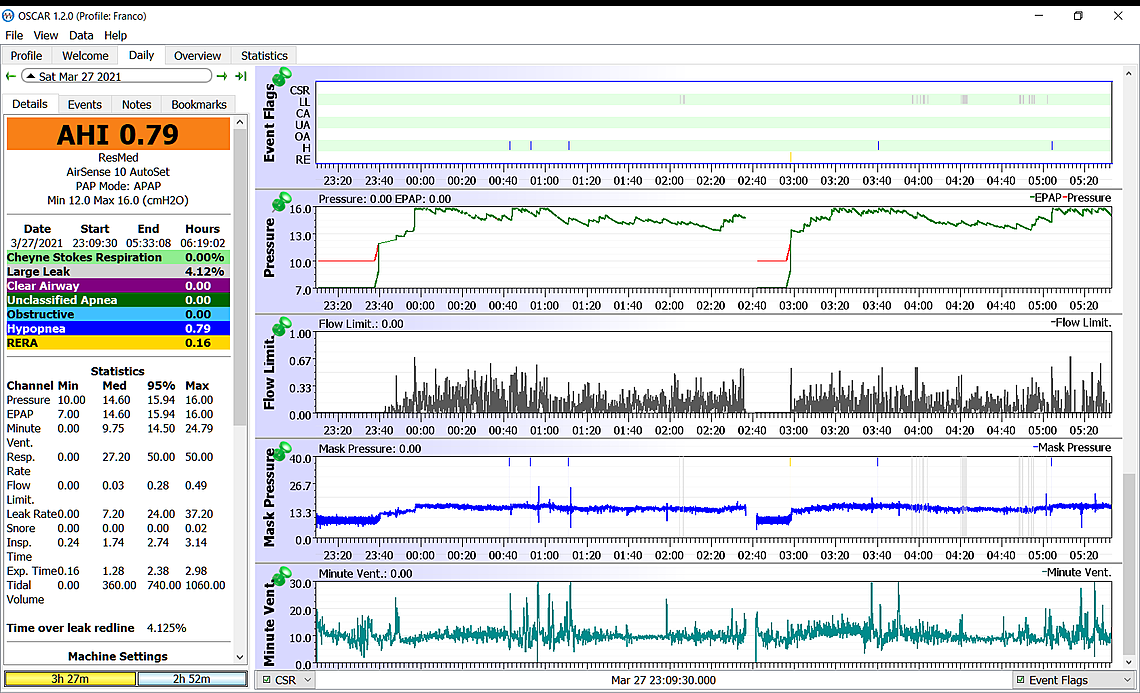 I am sending last night’s report, after the EPR setting change. The AHI’s have slightly increased, with Hypoapnea and RERA component, no OA’s. . Actually this time my sleep was a bit disturbed by frequent leaks throughout the night, with a persistent ( and bothering) hissing sound. Usually, I can fix this by readjusting the straps and the mask position which sometimes goes off center when I change side. Not this time. May be the silicon seal needs to be replaced. I don’t know if the EPR new setting has something to do with this. I’ll see how it goes tonight. Regarding traveling , I was wondering if it is safe to go without it. I wouldn't see why not, because I have traveled all my life without trhe CPAP, but may be with age my physiology has changed and it will affect me . Thanks 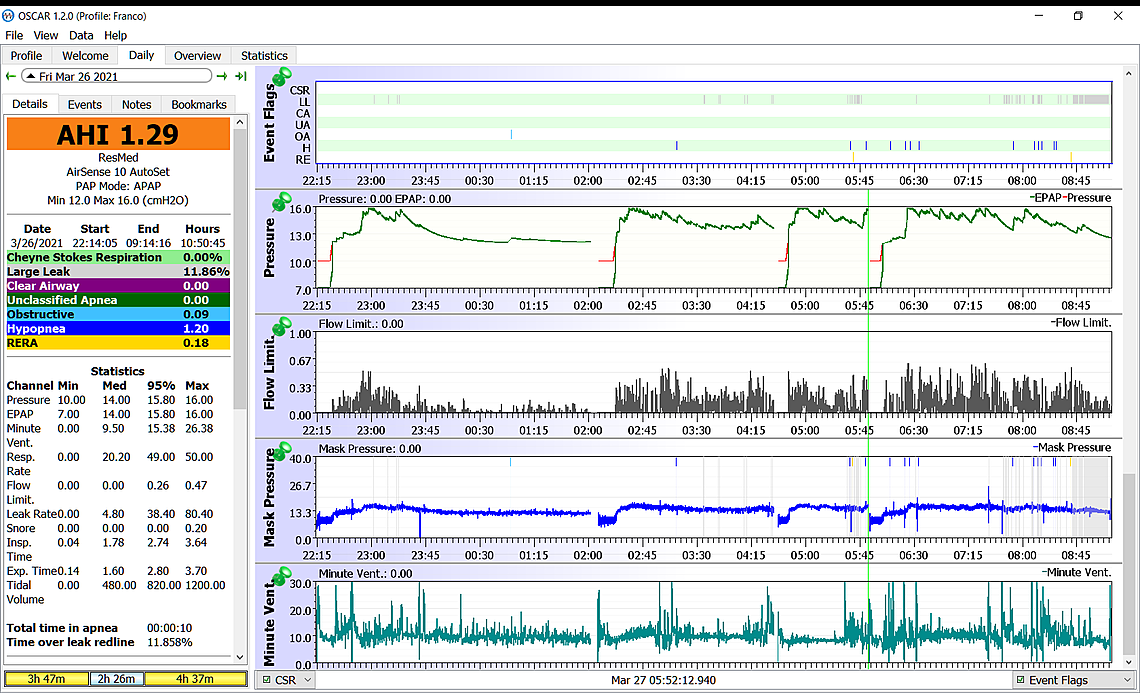 OK, thanks, I got it. I'll see how it works after tonight. Just a question, though. Given the fact that with the increased pressure my AHI's are so dramatically low, with practically no OA's and very few, short Hypoapneas, what perceived benefits should I expect from using the Ramp-only feature? Better, more refreshed?

Also, an unrelated, but important question: when I travel can I go without the machine for a couple of weeks or so? It is too cumbersome in the luggage. I believe there shouldn't be a problem, because I probably lived my whole life with SA and I never knew it..Perhaps you can comment on this. .

In fact, now that I think about it, when I was in my early twenties and I was traveling with friends In Italy, where I still lived at the time, one morning I found a doctor at bedside in my hotel room, when waking up ( better seeing a doctor, though, than... St Peter with the Hell's key in his hand...)

I never knew what really happened that night, but my friends told me that something was happening when asleep ( gasping for air?) and this is why they called the doctor.. Actually, I was feeling fine ( until I got the doctor's bill..). Now I think I understand..

Hi Sierra when I select the Ramp type option there is no option to select "Ramp only". I can only choose between different Ramp time settings( in minutes), or AUTO or OFF.

Hi Sierra Regarding the EPR change I am not too keen on changing the original settings prescribed by the doctor. However, if you tell me how to do it, I’ll try it just to see how it works. I can always reset it later.

Except for the very few 0 (zero) AHI’s I have got so far,( probably three or four in a year), my AHI’s are getting consistently lower and lower after the pressure change. Today, the 3rd day, the AHI's were 0.29, all of which being Hypoapneas . No OA’s or other

This can easily be seen by comparing my recent graphs with the older, high AHI’s ones, especially the one of Dec 16 which I had sent you. I seem to detect changes also on the Flow Limit graph , but I cannot put my hands on them. All in all, I am very satisfied with my therapy, if it continues like this.

If you have any comments, I always like to hear them..

Sierra As per previous post, here here is the 2nd and last report after the pressure increase. Over three days of increased pressure , even though there still is a mix of OA and H's, the AHI's seem to have fallen consistently below 1 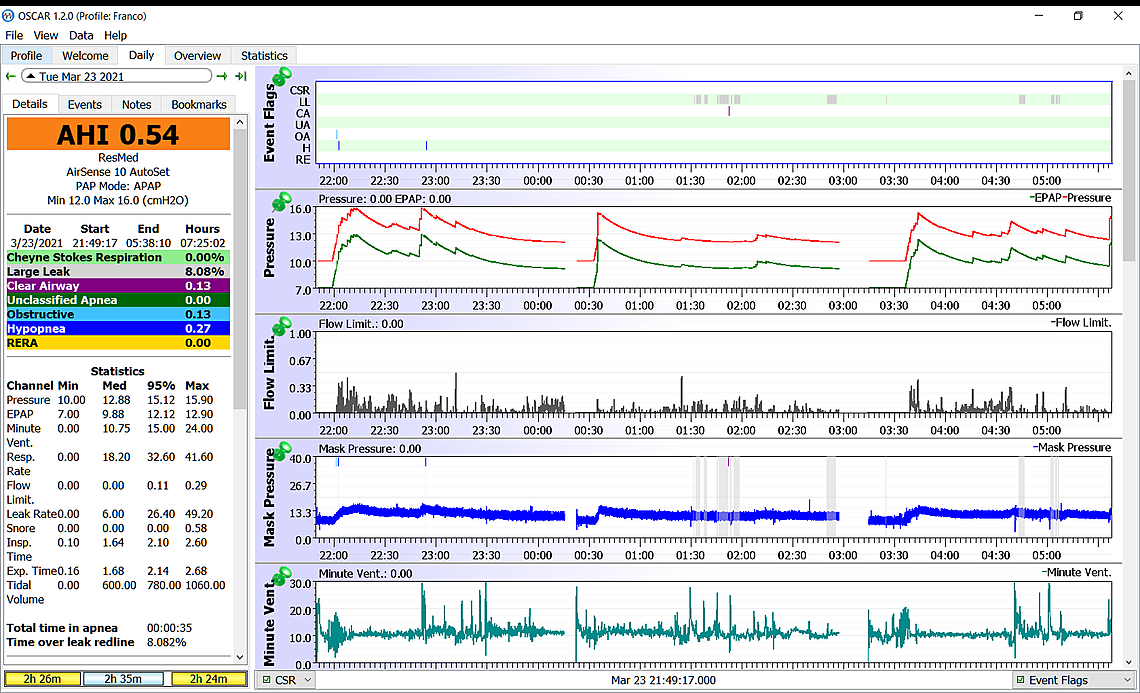 Hi Sierra I am sending a couple more daily reports after the pressure change to 12-16.
It is the first time that my AHI’s keep under ONE for three consecutive days. May be it is a sign of improvement. I have now fixed the “plots disabled” issue as per your instructions. I have also upgraded to Oscar 1.2. Regarding the CSR issue, the Stats show an incidence of 0% over the last 30 days and 0.11% over the last 6 months. I don’t think I should worry. From what I begin to understand, there may be some interesting clues in the Flow rate, the Flow limit and the Minute Ventilation graphics, but all this is kind of nebulous for me at this stage, because the analysis of these parameters involves a good understanding of technical and physiological issues. It is really a fascinating issue, even more so that it is about my health and I hold dearly to it.

Here are the reports 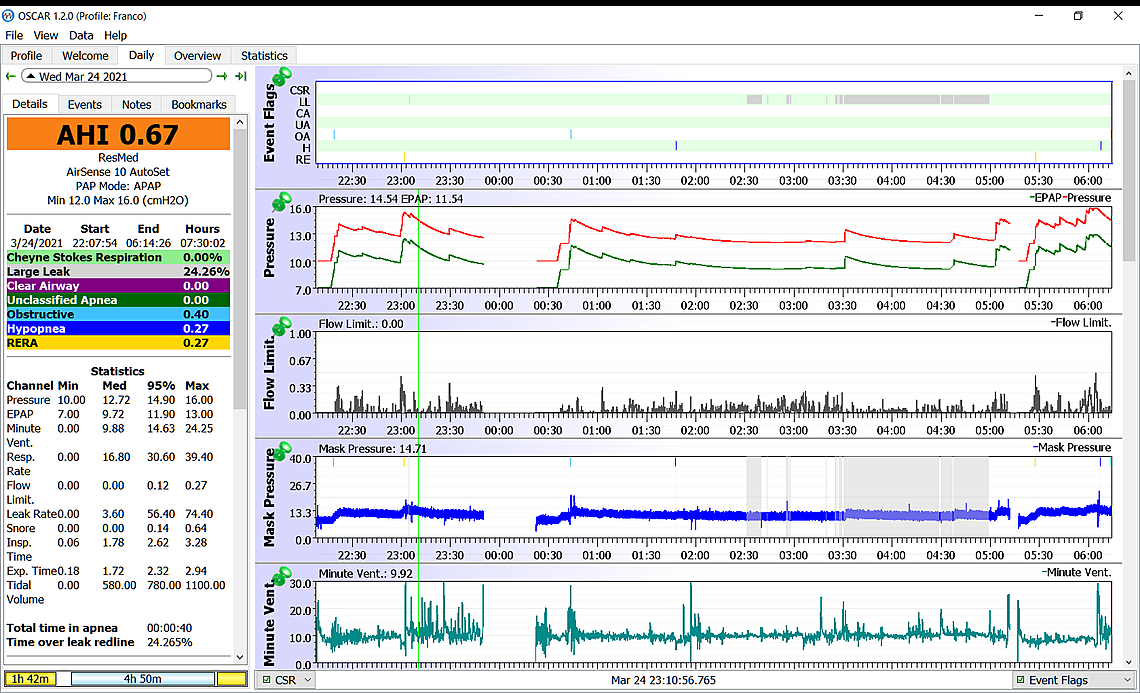 I'll send a 2nd and last report on a separate post. I have been trying for two days, but