About 25sec of no breathing caused SpO2 to drop down to at least 85%.
4
CPAP or APAP better for patients with AFIB?
2
is 92% basal SPO2 low? (overnight)
WarpedTrekker

About 25sec of no breathing caused SpO2 to drop down to at least 85%.
WarpedTrekker

Thanks. The reason I have bilevel is regular APAP didn't work to resolve my obstructions. I need the greater pressure support of 4 or more. I tried in the past to decrease it down to 3 or 2, but it made things worse with obstructions. I have mild apnea. I believe my sleep tests showed AHI 7 without CPAP. But it was really affecting me and my heart. My heart went into AFIB one time when I was on regular APAP. Which is another reason I switched to bilevel.

I usually don't have many CA's. Usually if I do they are only about 5 a night with no obstruction. But the ones that affect me are these longer 20second+ ones where my SpO2 drops rapidly.

I never heard of SpO2 dropping so rapidly when stopped breathing for only 20sec. People can hold their breaths for minutes when under water. Do their oxygen drop to 85% or below so rapidly?

About 25sec of no breathing caused SpO2 to drop down to at least 85%.
WarpedTrekker

Occassionally I'll wake up where my heart seems pounding a little and feel like I'm out of breath a little. My sleep apnea is well controlled now, with AHI <1 most nights. But even then, I'll occassionally have an event where I quit breathing for 20-25sec and my Contec SpO2 device records down to 85% and the alarm wakes me up. I don't wear it every night, but I kept waking up last night not feeling well, so turned it on.

See the chart. It shows roughly a 25sec of no breathing, but the machine only marked a 10sec CA. My SpO2 dropped to 85%. May have gone lower if I didnt have the alarm set at 85%.

Are these sporadic episodes of any concern? My normal SpO2 during the day is around 94-95% max. This is due to past DVT/PE blood clots, and now I'm on blood thinners for that. I have started exercising regularly and lose weight but it doesnt seem to help with these events. My left side of chest feels weak or worn out after these events. I lay on my side.

After I started CPAP last year, I was on it for two weeks. Then I had an AFIB episode, and immediately put on Multaq for AFIB. I figured it was because of years of untreated sleep apnea. Before starting CPAP, I was waking up with a lot of tachycardia problems. Since now on BIPAP, I had only one other episode of Ventricular Bigeminy and that was due to a LOT of obstructions all-in-a-row during one night.

I don't see how BIPAP could cause AFIB, unless you are still having obstructions. Have you downloaded sleepyhead software to look at what it shows? Even with AHI < 1, it could still show flow limitations.

Before starting therapy, my blood pressure was a little high, 140/90, 130/90. Somewhere like that. Now it is routinely 100/60 most of the time in early morning and evenings. Is this concerning low? Because Im wondering now how low it goes when I lay down to go to sleep and in my sleep.

I'm on Multaq and Bystolic for AFIB. Both can also sort of lower pressure too. Xarelto for blood clots. I recently have been having some dizziness upon standing and wondering if it's my blood pressure or something else.

My cardiologist and electrophysiologist are not too concerned. But this seems like a low blood pressure for me. My body has been used to 140/90 for years with uncontrolled sleep apnea.

I have a "ResMed Narval CC" that I got this year. I use it with my AirCurve 10 vAuto. The dental appliance helps a bit to move my jaw forward, but doesn't help every night. I still get obstructions, and I have my jaw pushed as far forward as I can tolerate. I'm seeking other options now, like tongue-base reduction surgery.

The Narval also only locks onto my upper teeth. Doesn't seem to lock on my lower teeth. My dentist said that was normal but I think he is trying to cover up a mistake.

Is it normal for SpO2 oxygen to drop to 80%'s during 20-45sec apneas?
WarpedTrekker

I have a Contec SpO2 monitor that i wear on my wrist. It records all night long. I'll post some charts of a good night and bad night. What is concerning, is that on my "bad" nights, I'll have a LOT of obstructions in a row. Yet my O2 doesn't drop very low. Maybe 90%. But then on a "good" night, I'll have a 20sec that drops it to the 80's which is weird. My AHI is most of the time is low. AHI < 2. Other times it goes up over AHI 7+. I'm trying to keep my AHI down, because I have AFIB, and when I get a lot of obstructions in a row, it has caused my heart to go into abnormal rhythm.

I am now on my second sleep doctor. Previous doctor had me only on APAP which didn't work well. My current sleep doctor at least got me a BIPAP which works better. But...he is not very thorough in looking into sleep problems. He looks at the 30-60 day summary and says my average is good. He refuses to analyze the nights where I have a LOT of obstructions.

So I started to set my own pressures, and bumping up the maximum. But my machine kept hitting the maximum as seen in the image below. But the doctor came back and reset my pressures, and said that I do better on "lower pressures" and with PS 4. I don't see how that is possible? He even lowered my maximum, as seen in the second picture. Also if I have any type of leaks, my night will be terrible. I've woken up with major palpitations, tachycardia, night sweats, and my left side of chest quivers bad like my heart took a pounding all night long.

Here is a "bad" night. Notice all the obstructions in a row. I'm not sure why that is, since I also use a ResMed Narval Dental Appliance to move my jaw/tongue forward. 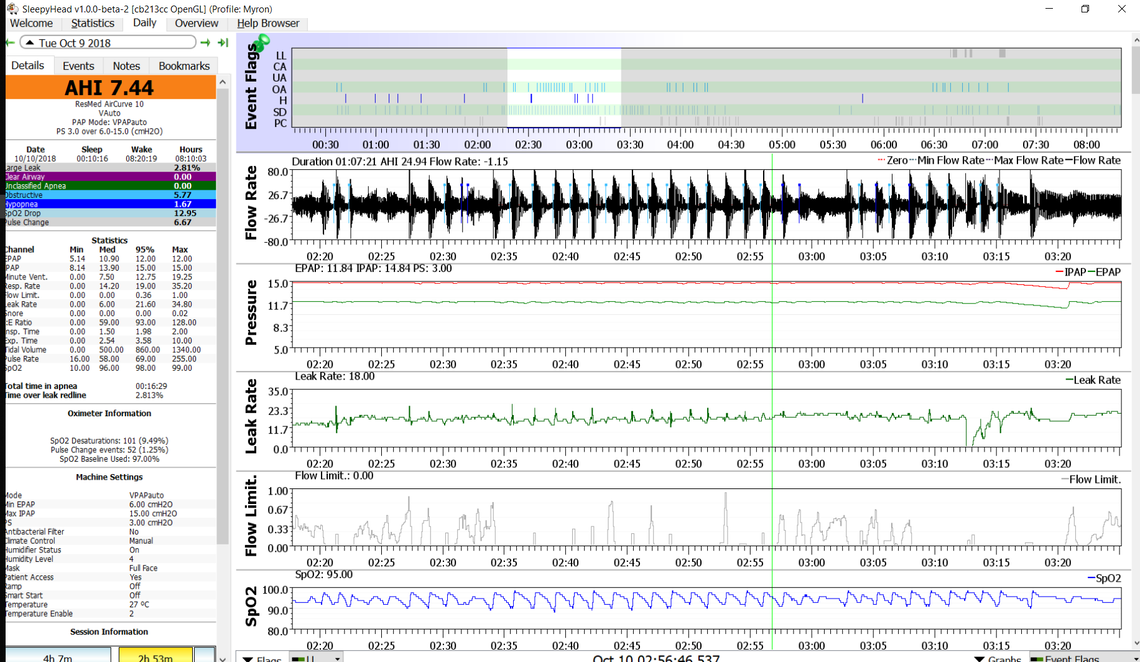 Here is a good night, but my O2 dropped to 80's during a single event. 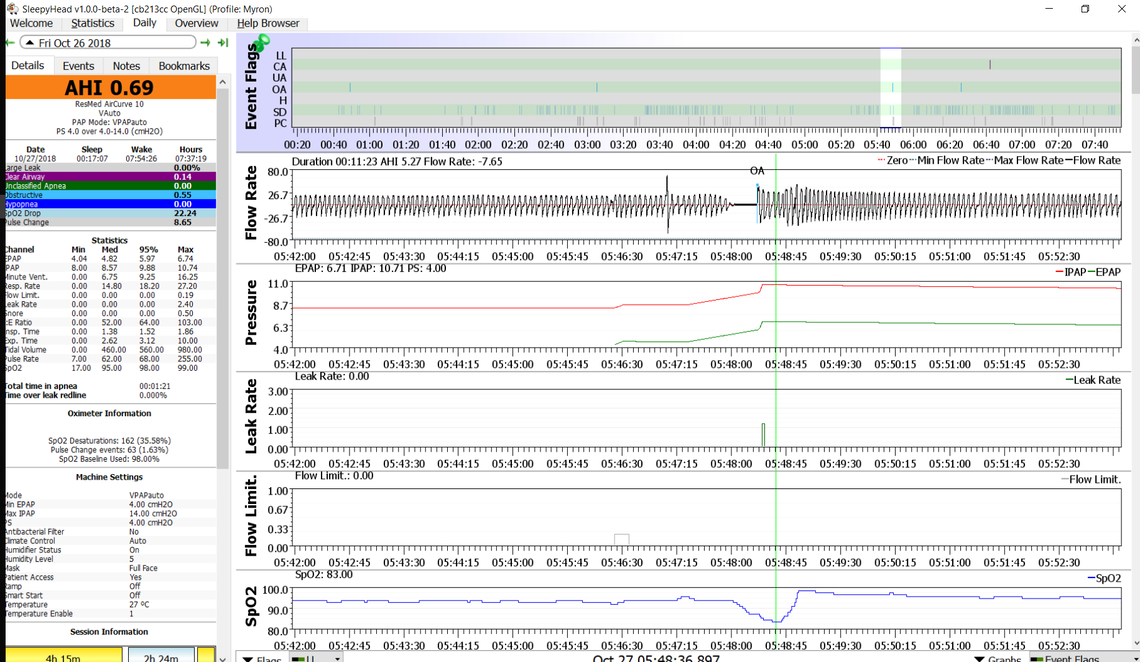 Is it normal for SpO2 oxygen to drop to 80%'s during 20-45sec apneas?
WarpedTrekker

I'm on ResMed AirCurve. EPAP 4, IPAP 8, PS 4. Maximum IPAP 14. My last sleep test showed I did good almost all night at 8/4 and 9/5 maximum pressures. But my other sleep test earlier this year, the doctor recommended 14/10 PS 4, but he never set my machine to that. He only set it to Auto range starting lower.

Ever since I started my CPAP/BIPAP, my Oxygen level will drop to the low 80's for a short time. 30sec or so. One time it was 78%. I bought myself a Contec SpO2 monitor that records overnight. It correlates low oxygen drops with my apneas.

My question is, is it normal to get into 80%'s during such short 20-45 second apneas? My doctor doesnt seem concerned. I am concerned, which is why i bought the O2 monitor, which has an alarm to wake me up when it hits 84%. It routinely alarms me a couple times a night or more waking me up.

I had the same issue for several months this summer. I kept trying to doze off to sleep, then would wake up. I eventually bought a Contec SpO2 watch with O2 finger sensor. I wear it at night to record what was going on. Immediately upon falling asleep, I'd have transitional Central Apneas happen. Then I'd wake up immediately upon dozing. It would repeat and repeat. I'd eventually give up trying to get to sleep and wouldn't sleep for a night.

I also had crazy random muscle spasms and jerks, especially in my neck and head area. My doctors claimed it was all "stress" and "anxiety" causing these symptoms. They had no solution, and I even went to the ER twice this year because I couldn't get to sleep.

I did find out though, that in May I had DVT/PE (blood clots in lungs), and I was in the hospital for a few days. During a couple nights, I told them to monitor my O2 levels which they did. The hospital O2 alarm kept going off, because my O2 would drop, just like it did when I was at home. And I would have the same terrible Central Apneas happen. This continued to happen for a week or longer after I was home and put on blood thinners. But it has since gone away for the most part.

I also found out I had gallstones, and during the day I had this "unwell" feeling all the time. Especially after eating and taking my Multaq and Bystolic for AFIB. I thought it could be medicine causing the issue. But I think all of these symptoms were caused due to a combination of my anxiety/panic disorder, blood clots, and the gallstones.

So far for the last couple of months, I haven't experienced any transitional Central Apneas. But I do occasionally wake up and have insomnia. I take a very low dose of Klonopin and Melatonin at night to sometimes sleep. This helps, and doesnt seem to affect my breathing.

My only current issue is that I still get dizziness and feel faint when I stand up sometimes! Last night I was on my couch, I stood up, and immediately the room started spinning, and I felt like I was going to pass out. I took my Blood Pressure and it was a little high, 153/90. Went to the clinic this morning and they had no answers. An EKG was normal.

I have the AirCurve 10 vAuto. This "Bi-Level" machine has no way to initiate breaths, even in it's static S-mode. ResMed has other models "AirCurve ST" and "ST-A" that have backup rates.

With the vAuto, if you quit breathing, the machine does nothing. It waits until it detects you are inhaling again. Even in static pressure mode it does nothing to force you to breathe.

Look up the specs on RedMed site for the standard "vAuto" machine. It has no backup rate and no function to keep your breathing if you have central apneas.